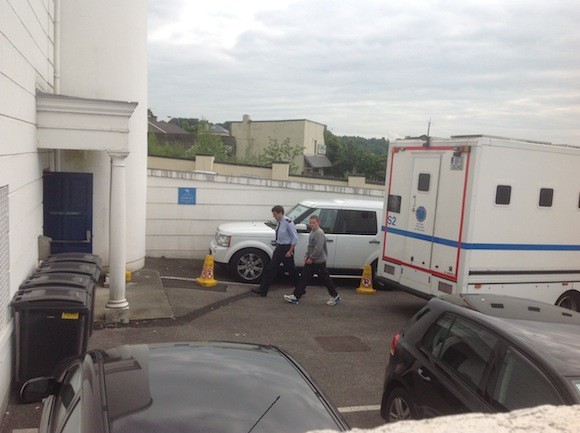 A Co Donegal man who used a golf club to attack the car of a man who had been celebrating his daughter’s christening has been given a chance by a Judge.

The court heard how two men had been celebrating one of their daughter’s christening on Septmber 22nd, 2012.

The men had left the function in the Carrrick Bar to leave a car home.

However, on the way to Carndonagh the men saw two other men – Ashley Nicholl and Barry Doherty.

When the men drove out the road, Nicholl and Doherty tried to ram the men off the road.

Both parties got out of their cars and an altercation took place.

The two men from the christening had to get back into their car after one had suffered various injuries.

Both Doherty and Ashley Nicholl then attacked the car using golf clubs.

Garda Seamus Lyons told the court that Nicholl, of Bocan, Culdaff struck the car window with such force that he broke the head from the club

The court heard that Nicholl, 23, had a total of 30 previous convictions including burglary, driving without insurance and driving while disqualified.

Nicholl’s barrister said the incident was a show rather than an act of sunstance.

He said he had been in prison before for burglary and that it was not a pleasant experience for him.

H said it had ben a short, sharp blast of reality and realised that prison is not a place for young men.

He said he did not want to return to it and was now seeking to go straight and had even secured working on a crabbing boat.

Judge John O’Hagan said he knew Nicholl and that he was tempted to send him to jail again.

However, he said he had ben told he had turned a corner and said he would reserve sentence until next April.

‘I’ll see if he has engaged. And for God’s sake, please wear a lifejacket on that boat,” added Judg O’Hagan.

MAN WHO USED GOLF CLUB TO ATTACK CAR GIVEN A CHANCE BY JUDGE was last modified: December 19th, 2014 by Stephen Maguire