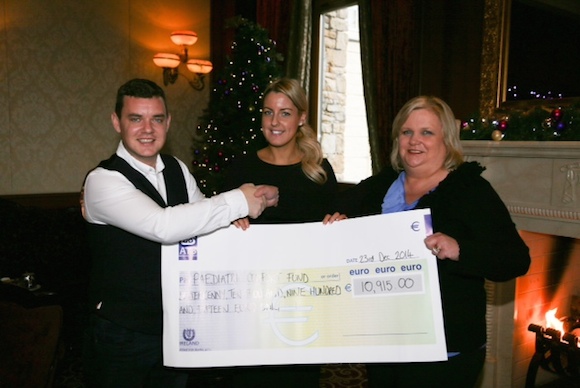 Danny O Carroll (From Mrs Brown’s Boys) pictured at the presentation of nearly €10,915 which was raised at his Fundraising Party at the Mt Errigal Hotel. Pictured from left are Evelyn Smith representing the Children Pediatric Comfort Fund Letterkenny General Hospital . Laura Jackson, events manager at the Mt Errigal Hotel.Photo By Brian McDaid

ACTOR and comedian Danny O’Carroll brought some Christmas cheer to two deserving local charities today – when he handed over cheques worth more than €21k.

The money was raised at his incredible celebrity bash at the Mount Errigal Hotel in Letterkenny earlier this month.

Today he handed over the proceeds of the night to the Children’s Unit at Letterkenny General Hospital where the €10,195 will help make the unit better.

And he handed over another €10,195 to the autistic unit at Lurgybrack National School.

Stars from sport and screen had attended the charity dinner – serving food to delighted fans.

They included many of the stars from the show in which Danny stars as ‘Buster’ – Mrs Brown’s Boys.

“These are two very deserving causes and it made my Christmas to be able to hand over this money to them today.”

He’s now hoping the Christmas charity dinner will be an annual event.

“I’m already drawing up a list of people to come along,” he added.