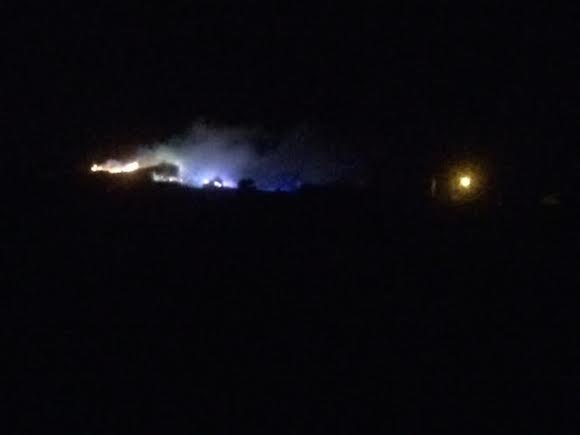 The house fire in the early hours of this morning.

UPDATE: THERE is sadness and disbelief in Creeslough today after the death in the early hours of this morning of a popular local woman in a house fire.

Fire crews raced to the scene of the blaze before 2am this morning.

The woman, who has been named locally as Josephine Higgs (76) , was a widow and lived alone although one of her sons live closeby.

He husband David passed away last year and the couple had two sons Colin and Brian.

Flames from the blaze at the house on Ballyboes Road, two miles north-east of the village, could be seen for miles around.

A popular elderly local woman was taken from the house but was later pronounced dead.

“This is a very sad day here,” one local man told Donegal Daily.

“Flames from the fire could for miles around. Everyone here was hoping and praying that no-one had been hurt.

“It is heart breaking to learn that this lovely woman has died. It is devastating, absolutely devastating.”

The area around the home has been sealed off for a forensic examination as fire officers and gardai work to establish the cause of the blaze.

However at this stage it’s understood they believe the fire was started accidentally.

A Garda spokesman said: “Emergency services responded to a call at this location. The body of a female in her 70s, who lived alone, was recovered from the house, and she was pronounced dead at the scene. Her body has been removed to Letterkenny General Hospital. The Office of the State Pathologist has been notified. A post mortem will take place this morning.

“Gardaí are appealing for witnesses or anyone with information, particularly those who were in the Ballyboes area to contact them at Milford Garda Station on 074 9153060, The Garda Confidential Line 1800 666111 or any Garda Station.”