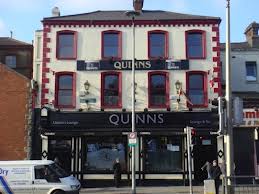 A bar regularly frequented by Donegal GAA supporters during the summer months was closed due to the discovery of a dead rat, and raw sewage on their cellar floor.

Quinn’s Bar in Drumcondra was served with a closure order on September 8th just two days after All-Ireland Hurling final between Kilkenny and Tipperary.

The bar is always mobbed on match-days at Croke Park and the pub is a particular favourite among Donegal supporters.

The closure order was lifted on the 10th of September after the problems were rectified.

Donegal supporters would’ve drank in the bar just weeks after it was initially closed.

Thousands of Donegal fans queued to get into the popular public house on the day of the All-Ireland football final between Donegal and Kerry on September 22nd.

The report carried out by health inspectors disclosed some horrifying details of why the premises was issued with a closure order.

A dead rat was found on the floor of the cellar, rat droppings and dry sewage were also found on the cellar floor, where foodstuffs such as bottled drinks were stored.

A prohibition order banning the sale of these items was also imposed because of a serious risk they had been contaminated by rats or raw sewage.

Surfaces in the back bar were also filthy, with filth, grime and bottle tops on the floor, while there was dried sewage waste, such as pieces of toilet tissue, on the main cellar floor.

“Dirty toilet paper from overflowed sewage is evident on a manhole cover in the main cellar and at other locations,” the report stated.

Meanwhile, door seals on the bottle fridges were “in an appalling condition and many are covered in extensive mould growth”, it said.

BAR POPULAR WITH DONEGAL GAA SUPPORTERS WAS CLOSED DUE TO DISCOVERY OF DEAD RAT was last modified: December 31st, 2014 by Mark Forker