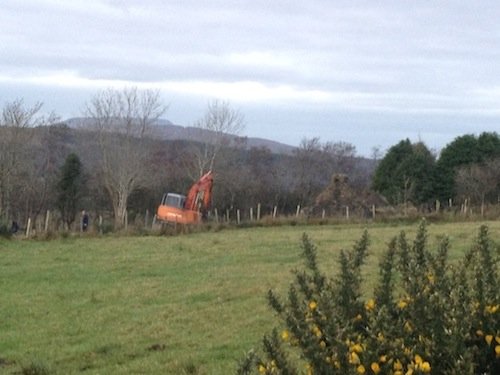 The scene of the incident in Glenswilly today in which a man was shot in the face while using a digger.

BREAKING NEWS: Gardaí are at the scene of a shooting in Glenswilly.

It’s understood a firearm was discharged during a dispute between two farmers in the area.

One person has suffered injuries.

The victim, who is aged 42, is understood to have suffered shotgun wounds to the face and shoulder following the attack in the townland of Ballinakilla.

He was rushed to Letterkenny General Hospital but has since been released but is being brought to Galway University Hospital for further treatment.

His injuries are not life-threatening.

Another man, who was along with the victim, managed to flee from the scene.

The area around the incident has been sealed off by local gardaí.

Detectives have began an investigation into the incident.

One man is believed to be helping them with their enquiries.

Forensic officers are are at the scene and the area has been sealed off.

The row is understood to have been sparked by a right of way on the land.

MAN SHOT IN FACE IN GUN ATTACK AFTER ROW OVER RIGHT OF WAY was last modified: January 4th, 2015 by John2