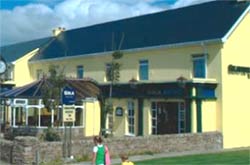 BREAKING NEWS: A well-known Donegal hotel has closed with the loss of up to 35 jobs.

The Seaview Hotel in Gaoth Dobhair which closed tonight.

The owner of the Seaview Hotel in Gaoth Dobhair, Mr Jimmy Boyle, confirmed to Donegal Daily that the hotel has closed with immediate effect.

The company trading as the Seaview Hotel, Boyle Entertainment Ltd, has now entered a voluntary liquidation process and a creditor’s meeting called.

A total of 35 part-time and full-time employees have lost their posts at the hotel which once employed 102 people at its peak in 2008.

Staff were called to the hotel and told the shocking news this evening.

The company has cited a number of contributing reasons for its decision to close including commercial rates €65,000 per annum.

“It is with sadness that the company, Boyle Entertainment Ltd, has creased trading and adding to the current downward spiral of the Goath Dobhair while being ignored by the current administration,” said Mr Boyle.