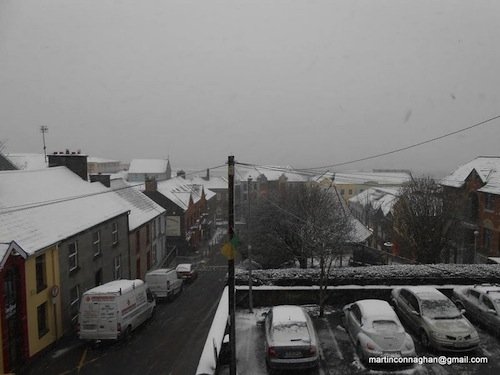 Snow at The Market Square in Letterkenny. Photo by Martin Connaghan.

Forecasters are warning that Donegal is set for even more snow in the next 24 hours.

Up to three inches of snow is set to fall overnight and tomorrow morning.

Met Eireann have warned that conditions are to get even worse across Donegal tonight.

However the snowfall is to be replaced tomorrow evening by wind and rain.

Most of the county awoke to a blanket of snow this morning with treacherous road conditions from Killybegs to Buncrana.

Throughout the day further heavy falls have added to those trying conditions.

In Gaoth Dobhair, road conditions are described as “lethal” after heavy falls of hail froze and were then covered in fresh falls of snow.

Some schools in the west of the county including Rosses Community School, Pobalscoil Ghaoth Dobair as well as Scoil an Luinnigh Gaoth Dobhair and Dooish National School in Ballybofey have closed.

The main road from Drumkeen to Ballybofey is almost impassable with long tailbacks.

Donegal County Council has dispatched its full compliment of winter machinery including snowploughs and gritters onto the county’s roads.

Gardai are asking people to slow down and not to take any chances.

Motorists are also asked to use common sense and to clear vehicles of snow before driving them.

Gardai are also asking people to call in on elderly neighbours who may be in fear of going out in public because of the snowfalls.