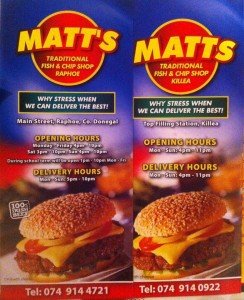 Matt’s Takeaway in Killea has been robbed.

COMMUNITY ALERT: A popular chip shop in Killea has been robbed by a gang of callous thieves.

Matt’s Takeaway published a notice on their Facebook page earlier this evening appealing for witnesses.

They also appealed to other business owners and homeowners to remain vigilant and to report any suspicious activity in the area.

Thieves stole a number of gas bottles during the raid, and they cut through pipes in order to get them.

Management at Matt’s Takeaway believe they would’ve needed a van or a trailer to transport the stolen items away from the shop.

“They cut the pipes to get them and the fittings, they would of needed an van or a trailer to carry them.

“If anyone noticed anything suspicious at time, or any suspicious activity this past few nights could you let me know.

“Please spread word, and people be aware that nothing is safe and always be on look out thanks.

This is the latest in a spate of burglaries that have been carried out in border towns in Donegal in the last number of weeks.