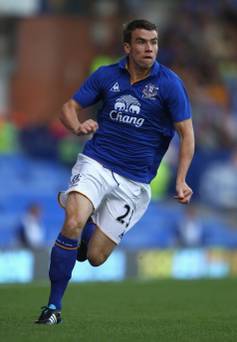 Seamus Coleman scored for Everton during their penalty shoot-out defeat to West Ham in the FA cup.

There was heartbreak for Seamus Coleman tonight as his Everton side bowed out of the FA Cup on penalties in their 3rd round replay with West Ham United.

In a thrilling shoot-out it was West Ham who finally prevailed 9-8 in a shoot-out that had twenty penalties taken.

Coleman dispatched his own penalty expertly in the shoot-out but it wasn’t enough for Roberto Martinez’s side.

It was a typical fast and furious cup tie which thrilled from start to finish.

Valencia put the hammers ahead early in the second-half but that goal was cancelled out by Mirallas with just seven minutes remaining.

The game was then brought into extra-time with both teams going for jugular despite the fact Everton were down to ten men following the dismissal of Aiden McGeady.

Everton looked to have booked there place in the fourth round when Lukaku put them ahead but Carlton Cole prodded home to sent the game to penalties.

Everton goalkeeper Robles missed his spot-kick and that allowed West Ham’s goalkeeper Adrian to step up and fire West Ham through.

HEARTBREAK FOR COLEMAN AS EVERTON BOW OUT OF THE FA CUP ON PENALTIES was last modified: January 14th, 2015 by Mark Forker