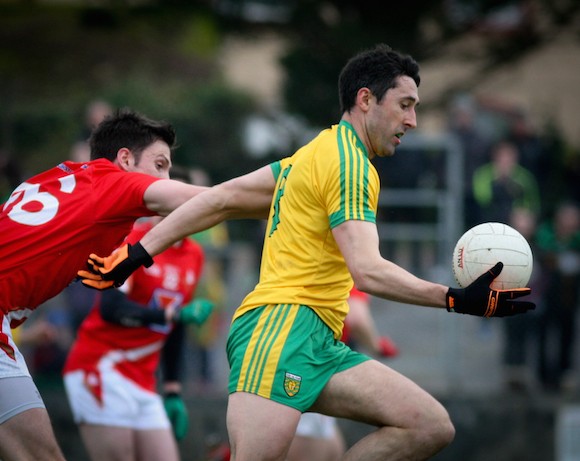 Retiring Donegal star Rory Kavanagh has said players are simply not getting enough rest during games.

The St Eunan’s player, who called time on his inter-county career this week, said there is huge pressure on young players to perform all the time.

In an interview to be broadcast today on RTÉ Raidió na Gaeltachta, he says that the pressure on older players, and a lack of recovery time, were important factors in his decision to retire from intercountry football.

And suggested managers needed to adopt a different approach for younger and older players to address these issues.

‘Teams will do anything to win the championship. The good teams are out training in December. The managers will do whatever they can to get the results. I don’t agree with it, but it’s the way things are going for teams up and down the country. The big thing for me is that players don’t get any recovery time, they have no time to rest.’

‘The game is getting too professional. Dublin, Mayo, Kerry, Donegal, the standards are going up every year, to a professional level, yet we’re still amateur players.’

He stopped short of saying that the level of preparation is taking away from the pleasure of playing.

‘I have really enjoyed playing for my county, and I think the other players are the same. But this issue very important for the older players in their thirties. It’s a game for young men – the younger players who aren’t married, don’t have family ties, but it puts huge pressure on the older players.’

When asked what he thought the solution was, he suggested managers tailor their approach based on different needs of the players.

‘I think that managers need to look at their panels, and have a different approach for the younger and older players. The older players need more recovery time. It will drive people away from the game eventually if they don’t address this problem. I know it’s something the GPA is looking at, and we need to get input from players.’

On the issue of the 2014 All Ireland final against Kerry, Kavanagh admitted that he was still very sore about it, and that he couldn’t, as yet, bring himself to watch the match again.

He will continue to play for his home team, St Eunan’s.

Rory Kavanagh was speaking to Séamus Mac Géidigh in an interview will be broadcast on Barrscéalta on RTÉ Raidió na Gaeltachta today at 11 am.