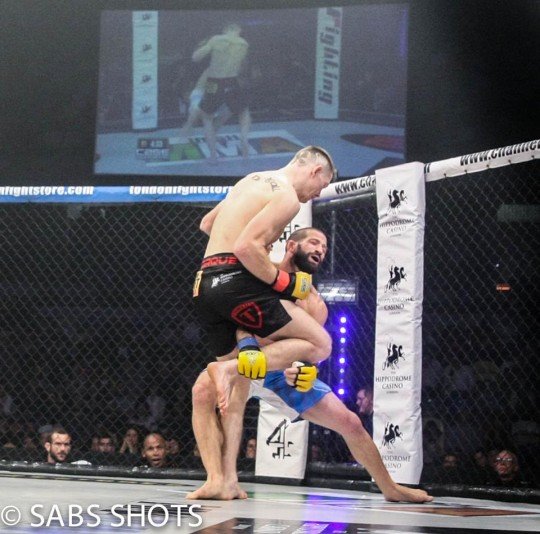 EXCLUSIVE: JOSEPH DUFFY- “I WAS TOLD IF I BEAT BOUSSUGE I WOULD BE OFFERED UFC CONTRACT”

Duffy delivers a knee to the face of Julien Boussuge after just thirty-seconds which knocked him out. Duffy knew before the fight if he won he’d be signed by the UFC.

EXCLUSIVE: Newly signed UFC fighter Joseph Duffy has sensationally revealed he was told three weeks before he fought Julien Boussuge that if he defeated the Frenchman he’d be offered a UFC contract.

In an exclusive interview with Donegal Daily, Duffy revealed that Joe Silva who organises all fights within the UFC contacted his agent and said if he won his fight against Boussuge he would earn a contract with the UFC.

Duffy was surprised the opportunity arose as quickly as it did, but said he tried to put it out of his head in preparation for the fight.

However, the Burtonport fighter admitted the lure of a lucrative UFC contract was obviously an added incentive for him.

Duffy said, “My agent was contacted by Joe Silva, who basically said if I defeated Julien Boussuge then I’d be offered a contract with the UFC.

“It was difficult as I was trying to concentrate solely on the fight, but I realised it was a massive opportunity for me and as a result the fight took on an even greater significance for me.

Duffy revealed he told only his closest family and friends about the offer, in case the deal was to fall through.

“I tried to keep it under wraps, in this game things can change quickly, I obviously told those closest to me about it, but in general we kept it under wraps.

“It was difficult in many ways for me, because I just wanted to focus on the fight but I had this amazing offer in the back of my mind, so I just had to try and block it out and focus on doing the job.

Duffy certainly did that, he delivered a brutal thirty-second KO that stunned and amazed those in attendance.

Duffy had done the job in the most clinically and impressive way possible and his path to the UFC had been incredibly paved after just two fights since returning to Cage Warriors after three years away from the sport.

It was announced last week that the UFC had officially signed Duffy, and he will make his debut in Dallas on March 14th against Vagner Rocher.

Duffy said Rocher is a dangerous opponent who has fought at a very high level throughout his career, but he’s confident he can do the business against the veteran.

Duffy said, “He’s a good fighter and very experienced, he fought Donald Cerrone and went the distance with him.

“Cerrone is a former world champion at lightweight level, so Rocher has proven he can compete with the best.

“But I’m confident I can do the business, I can’t wait for the fight and I’m relishing the prospect of fighting in front of 20,000 fans.

Duffy has said he’s been overwhelmed by the support he’s received and said it’s been incredible.

Duffy despite his dodgy Welsh accent is an Irishman through and through, a son of Donegal, which he proudly displays in ink with a large Dún na nGall tattoo on his back.

“I’ve always classed myself as being Irish, I’m a Donegal man.

“I was brought up in Wales but my heart is in Donegal and always will be.

“The support I’ve received from fans in Ireland and particularly from Donegal has been unbelievable.

Duffy said he’s been stunned by the amount of family and friends that have already booked up for his fight in Dallas.

“I can’t believe the amount of family and friends heading over for it, I genuinely didn’t expect them to go over.

“It’s Dallas we’re talking about here, it’s not a short wee trip and it’s not cheap either, but it only makes me more determined to do the job and win the fight.

One man who will be in attendance is his close friend Christopher Jimmy Johnny O’Donnell, although Duffy admitted he’s been reeling since losing a high-profile Darts match at Christmas.

“TOD will be there that’s for sure, he’s been there from the start and he’s been a great support, he’s delighted for me and it’s given him a lift after his own personal disappointment at Christmas.

“Graham’s been fantastic for me, and I can’t really put into words how much of an influence he’s had on my career. He’s been brilliant in every aspect of my career.

Duffy is well-known for being the as last man to beat current UFC superstar Conor McGregor.

Duffy defeated him inside forty-five seconds during their fight in 2010, and earlier this week McGregor admitted he would like to fight Duffy again.

“I believe him when he says he wants the fight, because I know he does want to put it right.

“It’s a blemish on his record, and he feels he’s improved so much since the time we fought and believes that he’d beat me if a rematch happened.

“It’s only natural for a fighter who’s defeated by a guy to want to get back in there and put things right.

“If he keeps winning and I hopefully start winning my fights then the hype will increase, but I’m not focusing on that, I’m just focusing on March 14th against Rocher.

Duffy jets out to Montreal in the next week for his training camp which will be held at the gym of UFC superstar Georges St-Pierre.

Despite Duffy fighting on the undercard all eyes will be on the Burtonport man or to keep his aunt Bernie Ward happy Meenbannad man.

Duffy starts his UFC career knowing he has the support of the entire county behind him, who hope he can propel his way through the division.

EXCLUSIVE: JOSEPH DUFFY- “I WAS TOLD IF I BEAT BOUSSUGE I WOULD BE OFFERED UFC CONTRACT” was last modified: January 22nd, 2015 by Mark Forker