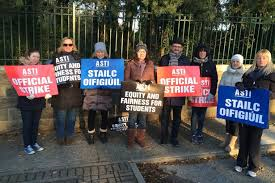 Over eight hundred Donegal secondary school teachers have opted to strike again as the row over the Junior Cert reform rumbles on.

It’s the second time since December that teachers in Donegal have went on strike as part of a nationwide stance amongst post-primary teachers.

The unions are concerned with the changes being proposed by the government to the Junior Cert which would see them assess 40% of the work of their own students.

Negotiations between ASTI, TUI and the Education Minister last week failed to produce an agreement on the issue which prompted the latest strike.

The strike has forced over three hundred and fifty thousand students to stay at home.

It’s hoped that an agreement can be reached between all parties following today’s latest strike action.