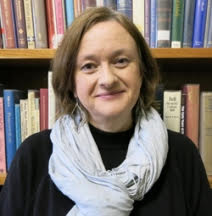 INISHOWEN native Grace Toland has been appointed the next Director of the Irish Traditional Music Archive, it has been announced.

The librarian and archivist (pictured), now based in Wicklow, is a well-known recorded traditional singer in English and Irish, and is a passionate supporter of the rich singing tradition of the peninsula.

She organises the annual Inishowen Singing Weekend, is one of the organisers of Inishowen Traditional Singers’ Circle and was the driving force behind the Inishowen Song Project.

Since 2006 she has been Librarian of ITMA, where her responsibilities have included information management, collections care and user services, and international best practice.

She is responsible for ITMA’s successful Inishowen Song Project microsite and her current projects include management of ITMA’s contribution to Europeana Sounds, an EU-funded project for improving public access to European audio materials.

ITMA Chairman Dermot McLaughlin said: “The Board of ITMA has been involved in planning this succession process for more than two years, and we are delighted that our recruitment campaign has produced this result.

“We knew that finding a successor to our founding Director, Nicholas Carolan, would not be easy. Our recruitment campaign went live in October 2014, and we are pleased with the quality of candidates who made it to the shortlist and final stages of the competitive selection process.

“The Board have every confidence that Grace Toland will use her extensive experience of working in libraries and archives along with her managerial skills, artistic credentials and performance profile to bring to this leadership role exactly the kind of vision and ambition that ITMA needs in this next exciting phase of its growth.”

She holds honours qualifications in History, Archaeology, and Library & Information Studies, and her professional background includes the roles of Information Officer at Bord Iascaigh Mhara, Assistant Librarian of the School of Celtic Studies (Dublin Institute for Advanced Studies), and cataloguer of various library collections. She has recently been elected an Associate of the Library Association of Ireland. She will take up office later this year.

The current Director, Nicholas Carolan, co-founded the Archive in 1987 and has led its development into a leading repository of Irish cultural materials (www.itma.ie). He is due to retire in mid-2015.

The Irish Traditional Music Archive is a national public archive and resource centre for the traditional song, instrumental music and dance of Ireland.

ITMA is funded mainly by the Arts Council/ An Chomhairle Ealaíon and the Arts Council of Northern Ireland, and is housed in State-owned premises at 73 Merrion Square, Dublin. It holds for open public access the largest collection in existence of the materials of Irish traditional music and of information on the music, and actively makes selections from its holdings freely available worldwide.