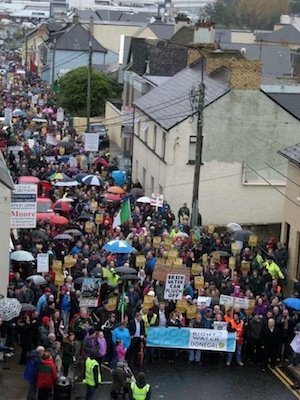 The huge crowd at the anti-water charge march in November in Letterkenny.

Right2Water Donegal are to stage another major demonstration against water charges in Letterkenny this coming Saturday.

Following on from some of the largest national and local demonstrations in Irish history, Right2Water Donegal PRO Gary Doherty says it will continue to build a mass movement of opposition to water charges.

“Our organisation, which involves trade unions, political parties and community groups – believes people are angry and unified in their opposition to these unfair charges. We are asking all anti-water charges protesters to unify and work together to ensure as large a demonstration as possible in Letterkenny. All peaceful protest including water meter protest, non-payment and peaceful disobedience, are supported by the Right2Water campaign.”

“We are calling for the Government to recognise and legislate for access to water as a human right and we are demanding the Government abolish the planned introduction of water charges,” said Doherty.

Saturday’s demonstration in Letterkenny will follow the route of previous protests, starting at Mr Chippie and ending in the Market Square.

There will be a number of speakers including an account from a Letterkenny resident, Maggie McClure, who claims to have been assaulted by Irish Water contractors last week. Protesters will also be treated to a performance from Maximum Homosapien, who went viral with his anti-water charges poem before Christmas.

Saturday’s protests will form only one tenet of the campaign against water charges. The Right2Water campaign will be meeting and having discussions with all of the pillars of the campaign – community groups, political parties and trade unions in the coming weeks.

The campaign will also begin a process of seeking submissions from individuals and anti-water charges groups throughout the country.