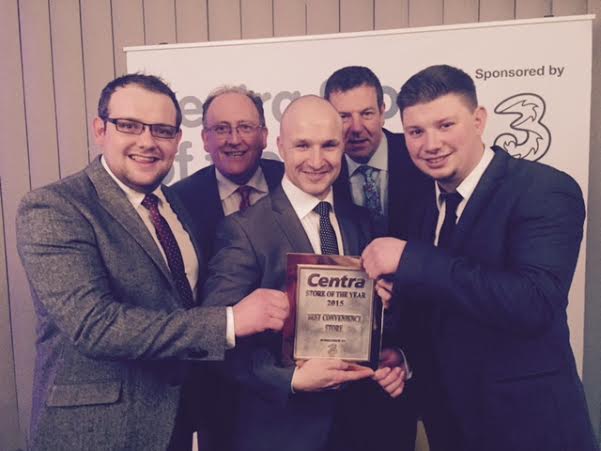 Who’s that with Mairtin??? Of course it’s Katherine Thomas

BREAKING NEWS: The staff and management of a Co Donegal business are celebrating being named the No1 in Ireland.

Kelly’s Centra Mountain Top in Letterkenny has been named National Centra Convenience Store of the Year 2015.

This prestigious award recognises all that is good about community retailing from investment in local products, involvement in the local charities.

This is the second year Kelly’s centra mountain top was shortlisted to the final 10 – reduced down from 463 in the competition.

The only Donegal store to have got this far, Kelly’s Centra won the national convenience beating off stiff competition from stores all around the country

Owner Mairtin Kelly said: “It’s all about the people. I am very proud to have picked up this award on behalf of them and my customers.

“I want to pay particular tribute to my managers David Bonner and Lee O Donnell who only took up the roles as store managers in 2014.

“They’ve really work tirelessly to deliver the excellent standards our customers have became accustomed to.

“With more store innovations planned in 2015 by the store Kelly’s Centra continues to lead the way in retailing not only in Letterkenny but now in Ireland.”