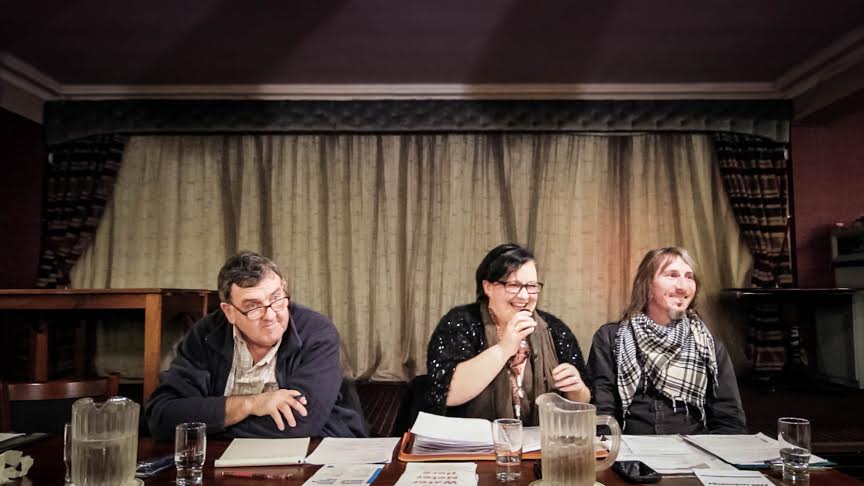 The organisers of the meeting. They were later told GMC Sierra staff had been at meeting

WORKERS from an Irish Water contractor sneaked into a public meeting – held to co-ordinate protests.

Hundreds of people were at the meeting of Buncrana Against Irish Water held at the Lake of Shadows Hotel.

But workers from GMC Sierra were also there – sitting at the back.

“We hope you listened hard and listened well to the comments of the people of Buncrana and carried them back faithfully to your masters,” said Enda Craig from Moville in a direct message to the contractors.

“You did not need to sneak in to the meeting, as if you might well be criminals – we would have made you welcome. You left again under the cover of darkness and slinked off into the night afraid to let it be known you were there.

“You heard us call for an agreement of mutual respect – be assured we will accept nothing less.”

At the meeting Anita and Gary Collins from Moneymore in Drogheda related their battle with Irish Water meter installers.

A three way agreement was hammered out between the residents, the meter installers and An Garda Siochana with ‘mutual respect’ being the order of the day

1. Meters for those who wanted them. ( the residents carried out detailed survey of 600 houses on the 3 estates )

2. No intimidation of meter installers as they went about their agreed work.

3. No Irish Water meters for residents who made it clear they didn’t want one.

This agreement is still in place.

Buncrana Against Irish Water chair Jim Quigley had drive to Louth to pick up the Collins – and then drove them home afterwards.