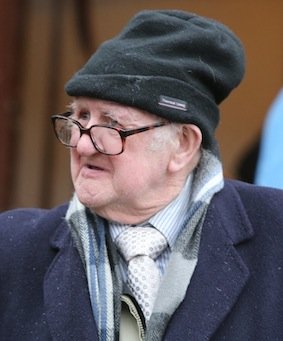 A Donegal pensioner, famous for running a shebeen bar with his Polish girlfriend, has appeared in court in a battle over a Roll Royce car.

Patsy Brogan appears in court after the dispute over the Rolls Royce car was settled yesterday. Pic by Northwest Newspix.

Patsy Brogan, 78, appeared at Glenties District Court yesterday after settling an action with a woman over the disputed car.

Brogan, who has had several long-running prosecutions over the Bog Hotel, near Frosses, is to be paid €1,450.

The court heard that Bernadette Diver had agreed to pay him back money he gave her for a run-down 1978 Rolls Royce Silver Spirit.

The Irish Independent report the car had belonged to her late husband Hugh Diver, who died in a tree-cutting accident in Ardara, in 2010.

Mr Diver was one of three men arrested and released without charge after a bomb was found at a telecoms mast in Ardara in November 1996. He later gave evidence to the Morris Tribunal, which was investigating allegations of corruption in Donegal.

Mr Brogan said Mr Diver had been a regular at the Bog Hotel.

The dispute with Mrs Diver arose last February, when Mr Brogan claimed she had offered to sell him the car as she needed the money. He said he gave €1,500 to Mrs Diver and he was given the keys and the car’s registration documents.

However, when he hired a specialist Rolls Royce mechanic to check the car, Mr Brogan claimed Mrs Diver, of Meentanadea, Ardara, refused to allow the engineer to examine it

He complained to gardaí but when no criminal inquiry was launched, he took the civil case to the local district court.

Mrs Diver had originally disputed the claims but at Glenties District Court her solicitor Moya O’Donnell told Judge Paul Kelly that she agreed to return €1,450 to Mr Brogan.

The pensioner, who was representing himself, had the decision explained to him by the judge. He adjourned the case to allow payment to be returned. Mr Brogan agreed he would hand back the keys to the Rolls Royce and the registration documents on receipt of the money.

Mr Brogan told the Irish Independent after the case: “I just want to get on with my life now.

“Hugh (Diver) was a regular at the Bog Hotel and a good friend. I agreed to buy the Rolls Royce.

“I never really wanted the car; I thought it might look good parked up outside the hotel and that’s what I was thinking,” he said.

In 2011, Mr Brogan was convicted under the 1924 Intoxicating Liquor Act at Donegal District Court and fined €50 for keeping alcohol for sale.

He said he and his girlfriend, Daria Weiske (35), were still “in love” adding: “She works during the week in Dublin but we still get to spend weekends together.”

Local people say there has been no activity at the Bog Hotel for several months. It’s understood garda checks on the premises in recent times have not found anyone other than Mr Brogan and his girlfriend there.

OWNER OF THE ‘BOG HOTEL’ AGREES TO GIVE BACK ROLLS ROYCE AFTER COURT DISPUTE was last modified: February 26th, 2015 by Stephen Maguire