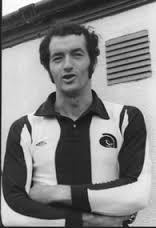 Former Finn Harps hero Brendan Bradley has been named as the Greatest ever Player to play in the League of Ireland.

The poll of the top 25 players was carried out by Liam Mackey of The Irish Examiner.

Bradley is a League of Ireland legend and scored an amazing 235 goals in the League.

That record still stands wand it’s a record that looks unlikely to be ever beaten.

Jason Byrne has made a good attempt at it, but it looks like Bradley will remain the league’s greatest goal-scorer.

Bradley helped Harps to their only FAI Cup success back in 1974 against St Patrick’s Athletic.

He’s a cult figure that is still revered by Finn Harps fans today and is still regularly seen attending matches at Finn Park.

BRENDAN BRADLEY NAMED AS THE GREATEST EVER PLAYER TO PLAY IN THE LEAGUE OF IRELAND was last modified: March 6th, 2015 by Stephen Maguire
FacebookTweetLinkedInPrint
Tags:
Brendan BradleyFinn Harps FCGreatest PlayerIrish ExaminerLeague of IrelandnewsSport