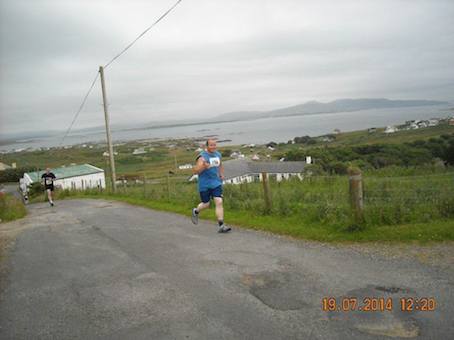 Denis is getting plenty of training in and around Arranmore!

A popular DJ is putting himself through a gruelling training schedule to raise funds for a local school.

Denis O’Donnell has been the resident DJ at the legendary Smugglers Nightclub on Arranmore Island for over fifteen years.

However, he has decided to the run in the London Marathon this year to raise much needed finance for Aphort National School.

O’Donnell is a former pupil there and the school is this year celebrating its centenary.

Denis along with a number of volunteers have compiled a book of old photos and stories and will publish a book on the school’s history in August.

In order to raise funding to publish the book and organise events, a task-force were forced to come up with fundraising initiatives to raise money.

O’Donnell selflessly said he would run the London Marathon and look for sponsorship with all proceeds going to Aphort National school.

“Aphort school is this year celebrating it’s centenary and a book is been published to mark it, and we have events planned on the 8th and 9th of August.

“We gathered old photos and stories from the last 100 years, and the book came together nicely.

However, we have no funding to publish the book and to organise the events so we discussed ideas of fundraising.

That’s when O’Donnell decided to use his upcoming marathon preparations as an avenue for fundraising.

O’Donnell added, “The first idea that came to my mind was to use my marathon entry to raise money.

“I put it to the chairman and the rest of the committee and we decided it would be a great way to raise funds.

Sponsor sheets were published and distributed to all the businesses on the island.

An online page was set up so the people away could contribute. The link to the online page is http://www.gofundme.com/n14ru0

100% of all money raised will go towards the school, flights and other expenses are solely paid by me.

“I have been training all year in all sorts of conditions, and last week alone for example I accumulated over eighty miles on some of the toughest roads, hills and mountains you will find anywhere.

O’Donnell only ran his first ever 5K in 2012 and now is preparing to run a marathon which is an incredible achievement from the affable Arranmore man.

O’Donnell concluded, “Thankfully now I’m in the tapering stage of my training and the weather has been a lot nicer this week!

“I’m confident my hard work will pay off and a lot of money will be raised for the school.