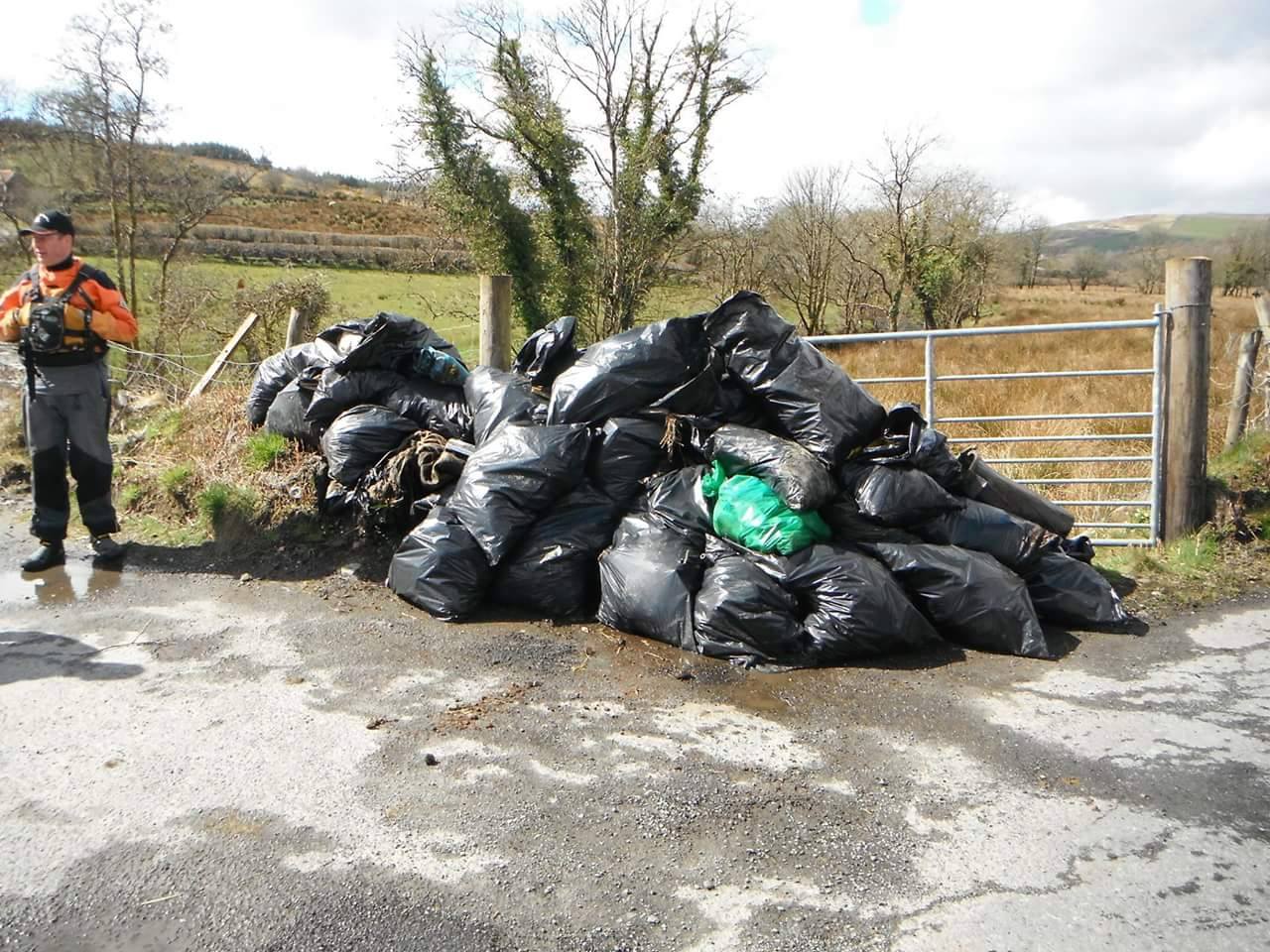 Some of the rubbish removed from the River Deele on Saturday.

You don’t expect to find ironing boards, engines and silage wraps strewn all over hidden rural rivers but that’s just a small section of the rubbish members of the Donegal Canoe Club came across as they cleaned up a section of the River Deele last week.

The river, which runs from outside Drumkeen to a mile below Lifford, really is a hidden gem for water sport enthusiasts containing as it does some of the most challenging courses in Donegal.

And when you factor in things like two metre drops, grade two and three features, 20 metre slides and obstacles known as The Beast Hole and The Coffin Hole, then you know this is not for the faint hearted!

Club members regularly use a section of the Deele outside Drumkeen and often host clubs from other parts of the country who want to experience the challenges it presents.

Indeed it was one such visit that prompted club members to leave their canoes at home and walk the banks to remove the rubbish that had built up there.

Club chairperson Michael Roulston said they hosted a canoe club from Mayo recently but were nothing short of “embarrassed” at the state of what they found in and along the river.

“When it floods the water levels can rise by up to six feet in places and this leaves plastic bags and the wrap in the branches of trees the whole way down.

They look like bad Christmas trees. People are simply dropping their rubbish over the side of the bridge,” he said.

He added this inspired them to come out on Saturday and Wednesday evening last and in a three hour period covering half a kilometre, members filled over 30 bags of rubbish.

“It was unreal. We had to be very careful as this river can be treacherous. It has large drops and 90 foot banks that are hard to scale not to mention trees that stick out. We had chainsaws to trim some of them back because if you hit these in a flow there’s no way of stopping.”

Mr Roulston added the Deele had great potential to attract visitors interested in white water paddling and this could only be good for Donegal so it was important resources like the Deele were kept clean and attractive.

He added the Donegal Canoe Club used many rivers throughout the county and even took part in sessions around the coast and encouraged anyone looking for a diverse and challenging sport to get in touch with them at the club’s facebook or website.

Stranorlar Municipal District litter warden, Brian McBrearty, said Donegal County Council was delighted to be associated with the club’s efforts as part of the Big Donegal Clean Up campaign.

“This was an excellent example of people interested in their surroundings taking the initiative and getting involved. Their work is invaluable and has made an instant improvement to this section of the river. People should be aware that when they are dumping rubbish they are only harming their own environment in the long run,” he said.

Initiatives such as this are run in conjunction with An Taisce’s National Spring Clean which takes place this month. Now an established part of the Donegal County Council’s community calendar, the event gathers momentum each year with more and more people getting involved.

To register for National Spring Clean call (01) 4002219 or register online at www.nationalspringclean.org