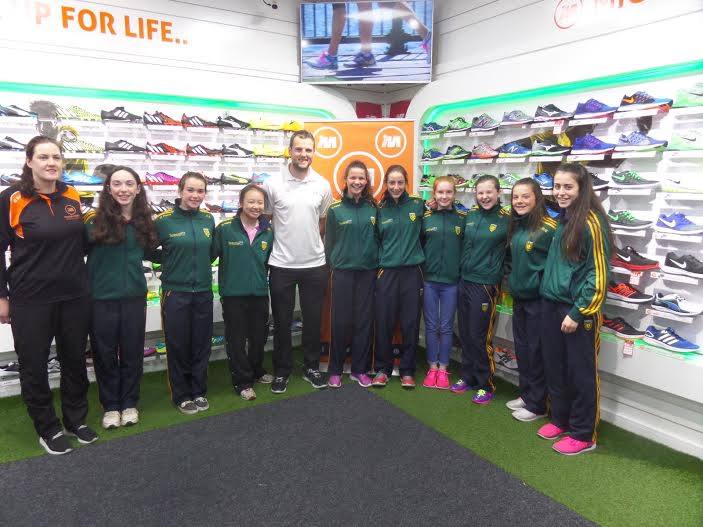 DONEGAL LADIES FOOTBALL NEWS: Four Donegal ladies teams are in action in a busy weekend for the county squads.

Cavan take on Armagh at 1pm followed by Donegal’s clash with Westmeath at 3pm. Extra-time will be played if necessary.

Donegal beat Westmeath handsomely earlier this month, but they are expected to provide a much sterner test this time around.

Meanwhile the U16s play home to Cavan this weekend in continuation of their Ulster campaign. The girls will take to the field at 3pm on Sunday at the grounds of Red Hughs GAA club.

The side has won two of its games but lost out to Antrim in their last match so Terry McCole’s side will be looking to bounce back against one of the leading counties at this level.

Michael Murphy with the Donegal U14 Championship team

The hosts are overwhelming favourites. Donegal manager Greg Harkin will be without quite a number of key players through injury but believes his squad are up to the challenge.

The girls were also delighted to have a chat with Donegal senior men’s captain Michael Murphy at Michael Murphy Sports this week – Michael providing gum shields to all the girls.

Said Greg: “We’ve worked hard over the past few months and we’re looking forward to this game now.

“I want to thank the sponsors who helped us over the past few months. There is very little money in the ladies game so every cent really helps.”

That was a view echoed by the manager of the U14 development league team Sabrina White who takes her team to play Fermanagh in Kinawley at 12 noon on Saturday.

The league squad (pictured) are doing extremely well, losing narrowly to Down before beating Antrim away the last time out.

Sabrina paid tribute to sponsors who have helped kit out the girls and support them in recent weeks.

Naomh Padraig Lifford and Buncrana GAA clubs have also provided much-needed training facilities as the ‘Centre of Excellence’ has not been available to the U14 girls this year.

Said Sabrina: “I can’t thank our sponsors enough. These girls play for their county and deserve our support and when I went looking for that support so many wonderful businesses and individuals helped us out.

“We’re looking forward to Fermanagh now. The girls have been superb all year and have really come together into a great squad.”