VOODOO ‘DELIGHTED’ TO BE MAJOR SPONSOR OF RELAY FOR LIFE

written by Stephen Maguire May 27, 2015
Facebook0Tweet0LinkedIn0Print0 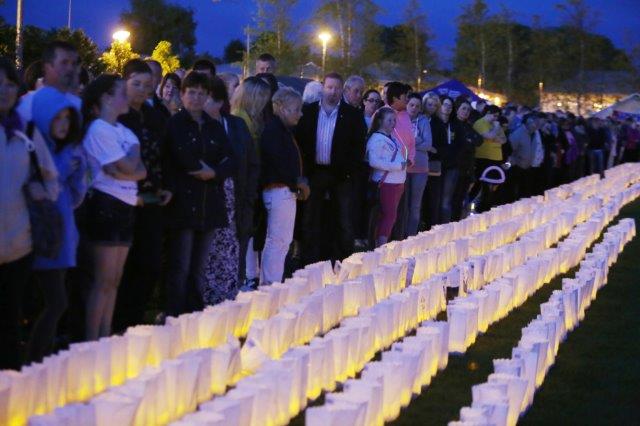 Another huge crowd is expected at this weekend’s Relay for Life.

One of Donegal’s best known entertainment outlets, the Voodoo Nightclub, has been confirmed as the major sponsor for next weekend’s Relay for Life event.

Directors Jason and Sharon Black said they were “delighted” to be associated with what they described as one of the premier community events now being staged in Donegal.

Jason has the gloves off for Relay for Life this weekend.

The Donegal Relay, now in its fourth year, gets underway this Saturday (May 30th) at 6.p.m. at the LYIT campus in Letterkenny, drawing to a close twenty-four hours later on Sunday.

The event helps celebrate cancer survivors, remember those who did not make it, and help raise both vital funds and awareness for cancer research.

Welcoming the sponsorship, Donegal Relay for Life chairperson, Robert O’Connor said it was a true vote of confidence in the event and in the work of the Irish Cancer Society both locally and nationally.

“This is a significant level of sponsorship and we are hugely indebted to Jason and Sharon for agreeing to support us in this way. We cannot underestimate what it means to everyone involved.

“The Voodoo has been a brilliant supporter of local events and organisations and now the directors have seen fit to pour in a significant amount of financial backing to our event.

“For cancer survivors and those who are currently receiving treatment and those who will experience this illness in the future, this sponsorship will be forever acknowledged and those of us on the Relay committee can only take our hats off to Jason and Sharon for boosting the event in this way,” said the chairperson.

Confirming their sponsorship this week, the Voodoo Directors said: “We are delighted to be associated with Relay for Life Donegal which has done so much in its short history to help in the battle against cancer.

“We see this sponsorship as a way of giving back to the community through one of the premier community events now being held in Donegal and we were only too happy to support it.

“Cancer is something that afflicts so many families and the Relay has helped create awareness of it and at the same time raise money for research.”

VOODOO ‘DELIGHTED’ TO BE MAJOR SPONSOR OF RELAY FOR LIFE was last modified: May 27th, 2015 by Stephen Maguire
Facebook0Tweet0LinkedIn0Print0
Tags:
donegalJason BlackLTTERKENNYRelay for LifeVOODOO