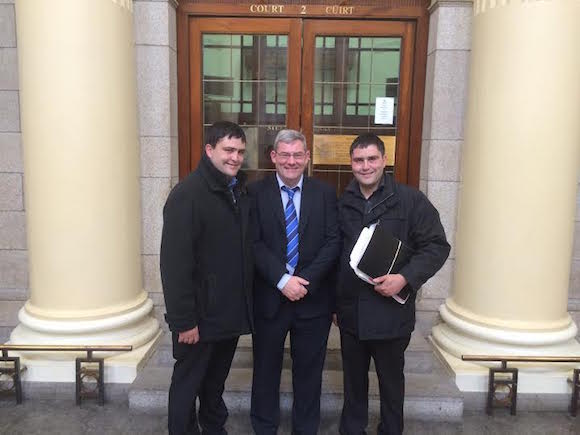 Journalist CJ McGinley with sons Patrick and Shaun outside the High Court in Dublin today.

Mr McGinley had claimed that during an interview on Highland Radio, Cllr McBrearty had described him as a liar who had engaged in dirty journalism.

This was emphatically denied by the journalist.

Highland Radio had earlier reached a settlement with Mr McGinley arising out of the issue.

And today, Cllr McBrearty apologised for the claims which he made during an interview on the Shaun Doherty Show on October 29th, 2010.

Mr McGinley told Donegal Daily “I feel vindicated that my good name and reputation has been restored – that’s all I ever wanted.

“This has been a very distressing time for myself and my family and I just want to put it behind me now.”

When contacted by Donegal Daily, Cllr McBrearty declined to comment.