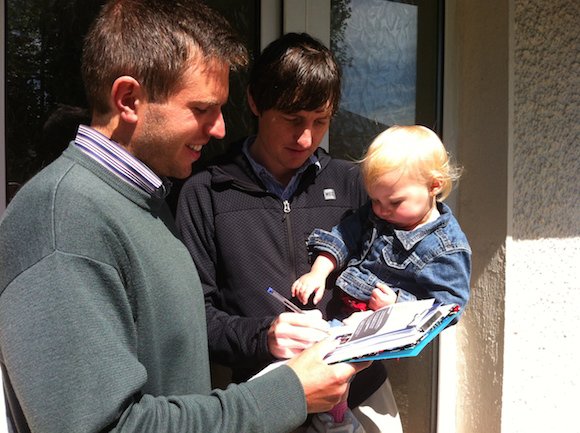 Tim Jackson takes his campaign to the doorsteps.

A new citizen’s initiative called “Clean Up Politics” has been launched by Donegal man Tim Jackson in the run-up to the General Election.
Jackson, from Ballybofey, previously founded the Africa-based building charity “Homes From Donegal.”
He explained the goal of the campaign is to have candidates who run in the election agree to four policy points concerning politicians’ earnings, on the basis that TD’s who earn closer to the average wage will better understand the impact their decisions in the Dáil have on normal voters.

– TD’s salaries will be halved, from just under €90k to €45k
– All expenses must be vouched with receipts
– Tax-payer funding of political parties, currently almost €13m per annum, will cease
– Ministerial and backbench pensions will be reduced to the average public service rate

Jackson said “By asking a politician to sign-up to these policies, we’re essentially sorting the wheat from the chaff, testing them to see who is in the job primarily for their enormous pay-packet, and who is in the job to simply build a better Ireland. The majority of TD’s in this constituency and around the country have earned well over half a million euro each in wages and expenses during their latest term in office, not to mention the ex-politicians enjoying very fine pensions indeed.”

“Like a lot of people, I’ve had enough of politicians and political parties selling us out, so we’re asking people to only vote for candidates who agree to these policies. It will still mean TD’s are earning considerably more than the average Irish worker, but not enough to remain in their ivory towers, unmoved by the harsh economic realities being faced by ordinary people around the country.”

A public petition in support of Clean Up Politics has begun online and at the doorsteps, and Jackson has invited all voters to take an active part in ensuring their candidates fully endorse the initiative, prioritising its goals if elected. See more at facebook.com/cleanuppolitics