Permission has been granted for a new hotel in Lifford. 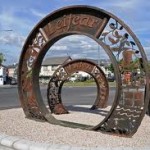 Donegal County Council gave the go-ahead for what will be the town’s only hotel on the site of the old ‘Inter County Hotel.’
A previous application for a 21 bedroom hotel had been rejected by county planners on a number of different grounds.
It is understood that well-known local businessman Austin Daly is behind the venture.