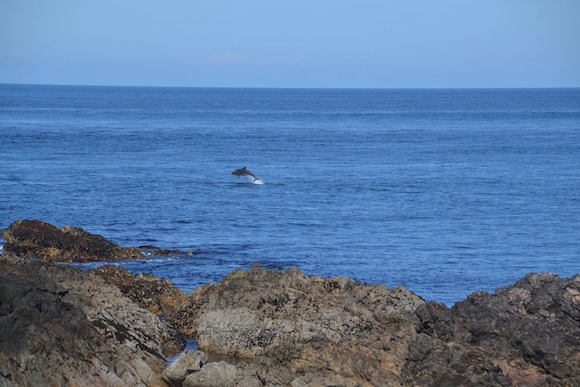 THAT FRIDAY FEELING – 10 THINGS WE LEARNED ACROSS DONEGAL THIS WEEK!

Some of the dolphins of Malin Head.

Summer kind of broke out across Donegal this week but we’ll accept plenty more of the rising temperatures. Yet again there was plenty of things happening across our beautiful county to keep us chatting.

These are just a few which caught the eyes of those in the Donegal Daily office.

1. Patrick is fine and Leo is back. Rory Gallagher’s hunt for an Ulster title remains in good hands as Patrick McBrearty’s injury is not as bad as first thought while Leo McLoone is spotted back at training.

2. We learned that we have some of the best natural resources in Ireland as a pod of 50 dolphins are spotted off Malin Head.

3. Chef Martin Anderson can grill more than a cheese sandwich. The chatty chef joined the Donegal Daily team with a weekly food column and his first outing has proved a huge success with our readers.

4. We learned that the family of murdered Donegal politician Eddie Fullerton may have to wait a long time before they ever get justice after the Tanaiste appears to ignore their calls for a meeting.

5. Donegal County Council will be a poorer place following the retirement of gentleman Bartley McGlynn after his retirement this week following 42 long years of loyal service to the local authority.

6. We learned that there are still plenty of big-hearted people in Donegal. People like Muff man Jim McLaughlin who donated a free calf to a couple whose herd of 75 calves were stolen in Kilbeggan. His offer sparked an avalanche of similar offers from as far away as Australia.

7. She may be unable to walk down the streets of New York but people rarely take a second glance of Sarah Jessica Parker who is back spending the summer in Kilcar – and enjoying the local honey by all accounts!

8. Making an honest living is a dangerous occupation if you’re a postmaster in Donegal after yet another attempted raid at the branch in St Johnston.

9. We learned that some people simply don’t give a damn about the beauty of our stunning county after vandals left Lisnagra Woods near Muff looking like a dumpsite after a drinking binge.

10. And finally ……..Michael Murphy delivered what we predicted he would do last week when he pointed some amazing scores to help Donegal beat Derry in the Ulster semi-final.