WHEN THE McHUGH BROTHERS MET THE MAILEY BROTHERS ……! 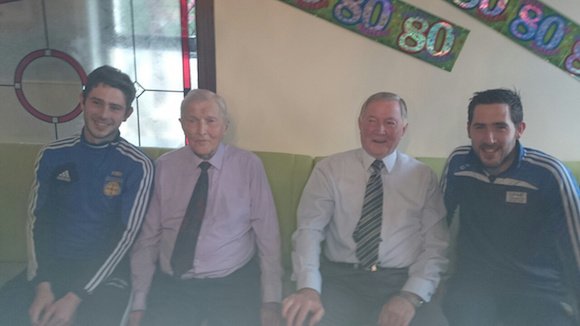 Brothers in arms! When the McHughs met the Maileys!

There may be a few years between them.
But there was no shortage of craic and conversation when the McHugh brothers of Kilcar met the Mailey brothers of Convoy and Letterkenny.
Brother Barney and Hugh Mailey were out celebrating Barney’s 80th birthday in Letterkenny this week when they came across the young Donegal stars.
And upon hearing it was Barney’s birthday, nothing would do the McHugh boys Mark and Ryan than to hop into a photo with the older boys.
Word has it that Barney and Hugh would have been well able to mark either of the boys in their day.
But with a few All-Ireland days between the lads, Barney thought it best to stick to the craic and the birthday cake.
The McHughs agreed that if they look as well as Barney does when they’re 80 years young, they’ll be doing well.
A belated happy birthday Barney!