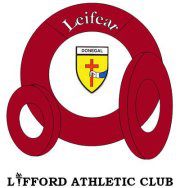 MORE THAN 350 runners took to the streets of Lifford this evening for the annual Lifford 5K, one of the key fixtures in the road racing calendar.

This was the biggest turnout yet for the event, with the race making a change from its traditional route to a start and finish on the athletic track.

With the race still looping the narrow streets of the town twice, it provided a great atmosphere for runners and spectators alike.

Pauric McKinney has been a stalwart of this event since its inception 14 years ago, and again this evening, the veteran Ballindrait man running in the colours of Inishowen AC showed he is still king of the roads, leading the race home in an impressive time of 15.44.

McKinney was followed home by City of Derry duo Christopher McPeake in 16.09 and Dermot McElhinney in 16.13.

In the women’s race, City of Derry athlete Catherine Whoriskey led the way home in a fine time of 17.34. Whoriskey was followed home by Derry City track Club’s Hannah McGowan in 19.39, with Foyle Valley’s Gemma McGinty third in 20.28.

A big thank you from the organising club, Lifford AC to everyone who turned out to support the event and who helped out in any way.