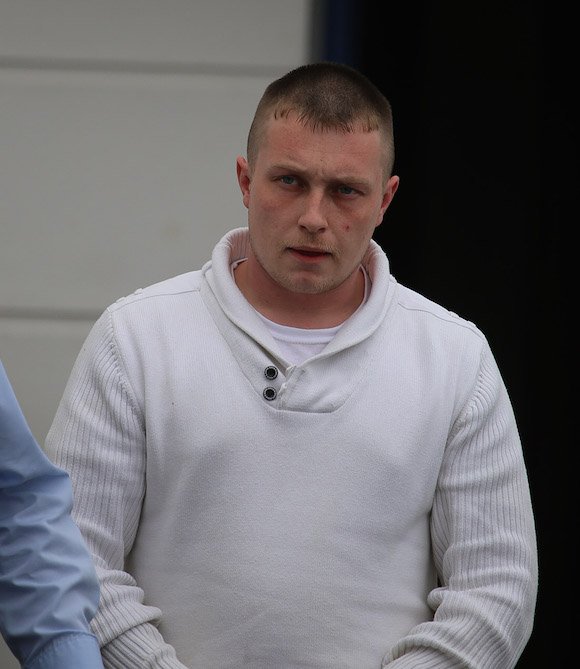 WOMAN PRETENDED TO BE PREGNANT TO STOP BOYFRIEND STRANGLING HER

A terrified young woman told her boyfriend she was pregnant to stop him from strangling her.

Shauna McLaughlin was assaulted and imprisoned by Brian McLaughlin after they argued following a night-out.

After returning to their home on St Oran’s Road in Buncrana, McLaughlin, 22, exploded into a rage before holding Shauna hostage and subjecting her to a vicious assault.

McLaughlin appeared at Letterkenny Circuit Court yesterday after pleading guilty to the 2013 offences at a previous sitting.

Despite his plea, McLaughlin will be free from prison in less than six months.

The court heard how McLaughlin set upon his girlfriend after she preferred to stay out with friends instead of returning home with him.

They argued and then McLaughlin suddenly punched her in the face before climbing on top of her on a bed and trying to strangle her.

Ms McLaughlin said she thought she was going to die but managed to claw at her attacker.

However, he twisted her arm into her back and she said she remembers waking up in the sitting room and he was telling her to wake up.

She called the emergency services but when Gardai arrived, McLaughlin locked the doors and a hostage-like situation began at around 1.55am.

He got a kitchen knife and began sharpening it and refused to allow Gardai into the house.

Shana eventually managed to hide the knife but McLaughlin went berserk when he could not find it and fetched a number of other knives for the kitchen.

Trained hostage negotiators were called who contacted Brian McLaughlin’s father who finally convinced him to take some medication.

He eventually released Shauna and at 4.40am, he finally gave himself up to Gardai.

He asked to be admitted to a psychiatric unit at Letterkenny General Hospital but he was refused admission because staff felt he had addiction issues.

Barrister for McLaughlin, Damien Crawford said his client had suffered a “mental meltdown.”

He asked how his client’s irrational actions were that of a rational man.

At one stage McLaughlin had held aloft a television over his head and threatened to throw it at Ms McLaughlin.

When questioned about this by Gardai, he denied it saying he would have nothing to play his Grand Theft Auto computer game on if he did.

Mr Crawford said his client was receiving medication for mental health issues but had unfortunately mixed it with alcohol on the night.

“He is is deeply ashamed and has been trying to unravel what happened that night. He was on medication. This is more of a mental health episode rather than a criminal episode and I am not taking away from what happened to Shauna. He had not got an appreciation of what was going on around him. He had a mental meltdown,” said the barrister.

Judge Francis Comerford said there was a limit to how much mental illness could explain McLaughlin’s actions on the night.

He described the actions of McLaughlin in holding down his victim and then “throttling” her as horrible and said the outcome could have ben far, far worse.

He sentenced McLaughlin to three years in prison for each offence to run concurrently, but suspended the last two and a half years.

Two relatives of Ms McLaughlin were in court for the hearing but the court was told that she had now moved overseas.