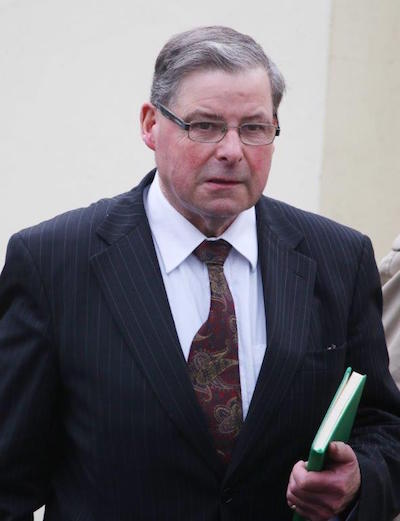 John Barrow who was jailed for two years for abusing a young boy. Pic by Northwest Newspix.

A 72 year old former engineer from West Donegal has been sentenced to two years in prison for sexually assaulting a 10 year old boy.

John Barrow, who worked with a local electrical firm, indecently assaulted the young boy in the Crolly area in 1984.

Barrow molested the boy after paying him to row his boat while out fishing and on another occasion when they returned from collecting turf.

The victim, who now lives abroad, gave his evidence by video-link in the trial.

Throughout the trial Barrow, who is originally from Co Louth, denied the allegations and pleaded not guilty.

However a jury found him guilty of the two charges of indecent assault and yesterday he was sentenced to a total of two years in jail by Judge Francis Comerford at Letterkenny Circuit Court.

In a witness impact statement given by the victim and read out in court, he said he had grown up a very angry and misunderstood young man.

He got into trouble with the law, had drank too much alcohol and also took drugs.

His marriage also broke down and he was now estranged from his wife and children.

He revealed how up until recently, he could never tell his family what had happened to him and now he wanted to apologise for all he had done to them.

He described the huge relief he found when he told a cousin about what had happened to him as a child and he encouraged him to contact the Gardai.

He said “I will never be able to forget what that man did to me as a child. He has taken away my innocence and that can never be replaced.”

The court had previously heard details on how Barrow had preyed on the young boy.

After owing out to a small island, Barrow gave the boy a condom and asked him to put it on.

The victim said he was unable to do so but that the pensioner then produced pornographic material from a black bin liner and committed a sex act.

A couple of weeks later he said he was offered more money to help bring in turf.

On this occasion, the victim said, the pornographic material was produced again and he was told to take it to a bedroom.

The pensioner then got into the bed beside him, touched him and committed another sex attack.

The court heard that Barrow is now 72 and suffers from ill health including a blood disorder.

Judge Francis Comerford said he accepted that Barrow was of a certain age was unlikely to reoffend.

However, he cited the fact that Barrow had continued to insist that he was innocent.

“This is an indecent assault on a 10 year old child without any indication of any remorse.

“This is a tremendously serious crime and will have lifelong consequences for (the victim),” he said.

He sentenced Barrow to two years for each of the two indecent assault on the then ten year old boy but ordered that they run concurrently.

He also placed the pensioner on the sex offenders register for 10 years.