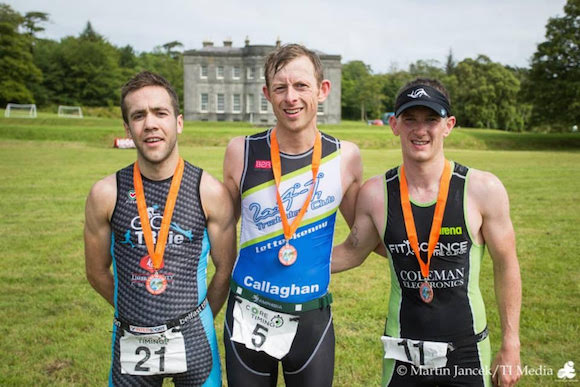 Club member Aidan Callaghan was home first in the Super Series at Lissadel House Olympic Triathlon on Sunday.
Sligo’s Lissadell House played host to round 3 of the Triathlon Ireland Super Series.
The Super Series consists of the top 50 male and female triathletes in the country racing against each other. Aidan Callaghan from Letterkenny’s 24/7 Triathlon Club claimed the men’s title. Callaghan clocked 18:33 for the 1500 metre choppy swim, 1:03:32 for the testing 40 kilometre bike before posting a strong run over the 10 kilometres to finish in a time of 1:59:36.

In the Age Group race, Triona McMenamin won the ladies race in her debut at this distance in an overall time of 2.21.10. The course was challenging with the run course by all accounts being difficult with varied terrain and plenty of testing hills. See results below.

Geneva, Switzerland was the venue for this year’s ETU European Triathlon Championships, which saw a 49 strong Irish Team compete against the best triathletes in Europe.

Donagh O’ Sullivan was next to the start line in the Olympic distance race at 7:18am on Sunday morning, a 31:50 swim was followed by an excellent 1:05:19 bike and a 47:40 for the 10km run, finishing in a time of 2:28:54.
“I’m happy with my performance and I’m proud to be representing my country today”.
Team member Hugh Gallagher took to the Olympic distance start line at 7:25am on Sunday, a good 26:09 swim was backed up by a hard 1:06:24 bike and an impressive 39:56 run, giving an overall finish team of 2:16:33, 35th in his age group.
“It’s been 8 months of solid training and I’ve peakedat this weekend, I’m delighted with my performance” commented the Arranmore native.

“A huge thank you has to go to all the Irish supporters along the race routes, they were fantastic and it gave the Irish athletes a huge mentall boost”.
Donagh and Hugh now turn their sights to the ITU World Triathlon Championships in Chicago from 15th – 20th September.

The club continues with its summer training. Please see our club website www.letterkenny247.com or our Facebook page.