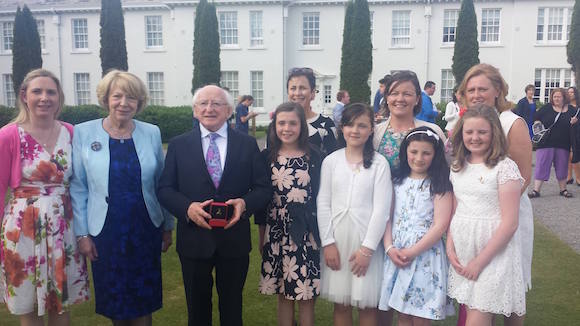 The fantastic work of the Childhood Cancer Foundation received a timely boost recently when some its founding members were invited to Áras an Uachataráin for tea with President Michael D Higgins.

Maura Toner from Inch Island and her daughter Emer, joined Virginia Murray from Letterkenny and her daughter Ciara at the President’s special summer garden party event. They were also joined by Alice Rennick and her mother Mary Claire from County Meath and Niamh Richard from Dublin with her mother Aine.

The volunteers are all founding members of Childhood Cancer Foundation whose overarching mission is to spread awareness of childhood cancer.

Maura, whose 8-year-old daughter Emer is in remission from Stage 4 Neuroblastoma, said it was a huge honour and boost for volunteers working with the charity to have their work recognised by The President.

“Childhood Cancer Foundation has only been in existence for a few years, so it is was a terrific boost to everyone involved to receive this invitation from President Higgins and his wife Sabina.

By spreading awareness of childhood cancer, the difficulties of treatment, the death of at least 20% of those affected and the long-term side effects faced by survivors, we hope to change attitudes towards childhood cancer.”

To that end, Maura explained that the four children, who are all cancer survivors, presented President and Mrs Higgins with Gold awareness pins, the international symbol of childhood cancer awareness.

“Childhood Cancer Foundation currently fund the salary of the play specialist on St John’s Day Ward, Crumlin. We are also funding a medical research project into the benefits of complimentary therapies for children who are treated for childhood cancers and will soon announce another project which will directly and greatly benefit all children in Ireland being treated for cancer,” she added.

Earlier this summer the Childhood Cancer Foundation announced partnerships with the Gaelic Players Association (GPA) and with Emerald Garrison Ireland’s largest independent Star Wars costuming club, and work is already under way for the third annual Light It Up Gold campaign for childhood cancer awareness this September.

“We’ve had a very productive summer and September, Childhood Cancer Awareness month, promises to be our busiest ever, but when we see the incredible fortitude and bravery that children show while enduring harsh chemotherapy and radiotherapy treatments, we must continue our work for them and their families.”

Anyone wishing to purchase a gold pin in support of the Childhood Cancer Foundation can buy one online on their website – www.childhoodcancer.ie The pins will be sold at various locations around Donegal in the coming weeks and details will be available on the charity’s facebook page www.facebook.com/lightitupgold