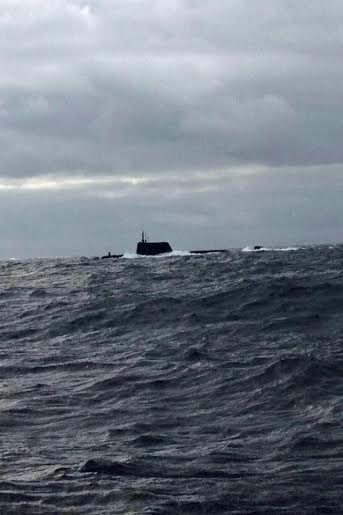 The submarine off Tory. Pic by Colm O’Brien.

The submarine which had a close encounter with a Donegal fishing trawler close to Tory Island has been identified as a British Royal navy vessel.

Seán O Briain, from Machaire Rabhartaigh, was setting crab pots 14 miles northwest of Tory Island last Thursday when they saw the submarine coming towards them.

The huge vessel then passed less than 200 yards in front of them.

“We were doing a speed of about 7 miles, and although the general rule is that when a boat is setting pots or pulling pots, that other vessels are supposed to give us right of way, but not in this case, we needed to slow down to let the submarine pass.’

Mr Moffatt said that the Royal Navy appeared to ignore there own code of conduct following the close encounter.

“The Royal Navy’s own Code of Practice stipulates that a submarine on the surface should maintain a separation from an MFV and normal ‘rules of the road’ should apply. The IMO rules also place the onus on the submarine to avoid MFVs.

“The Royal Navy Code also indicates that communication should be established with nearby craft so as to warn them of any likely dangers posed by the submarine operations,” he said.

On Tuesday, Britain’s Ministry of Defence admitted that a Royal Navy submarine was responsible for dragging a trawler backwards off the Northern Ireland coast earlier this year.

Submarine expert Moffatt said the area to the North and West of Donegal is used for transit by both SSN and SSBN types used by the RoyalNavy.

The issue is further complicated by the fact that submarines from the Russian Federation also frequent the area hoping to pick up the tracks of RN vessels departing from their base on the Clyde.

Rather embarrassingly for the United Kingdom they had to ask for external NATO assistance in tracking a suspected Russian vessel in the area last December – the UK military no longer has maritime reconnaissance aircraft.

Meanwhile some countries take an uncompromising attitude to submarines operating in their coastal waters and the attendant dangers they pose. The Finnish Navy fired warning depth charges (low intensity explosives) at a suspected submarine in their territorial seas.

Meanwhile neighbouring Sweden undertook a major anti-submarine operation after a suspected intrusion into its waters in October 2014.

This year the Swedish military are to get 6 billion kroner to beef up their anti-submarine warfare capability.