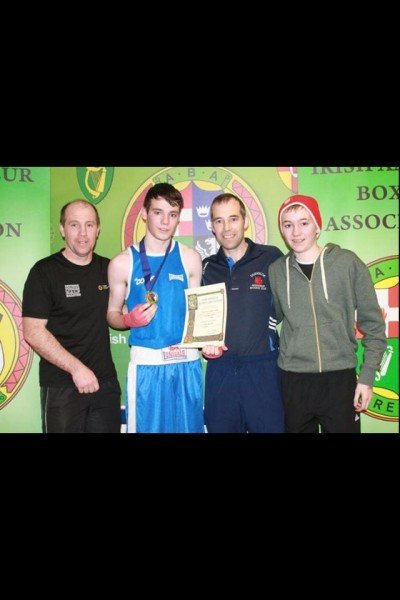 BOXING: DELIGHT FOR MARK MCCOLE AS HE PROGRESSES TO ALL-IRELAND SEMI-FINAL

Brendan, Mark, Jim and Matthew McCole after his victory at the Ulster championships.

BOXING: There was delight for Dungloe ABC fighter Mark McCole as he produced a superb performance to book his place in the All-Ireland semi-finals.

The judges awarded McCole the victory on a 2-1 score-card in what was described as a cracking contest.

McCole defeated Eddie Lawrence from The Holy Cross boxing club in Drogheda last weekend – and is really showing why he’s been tipped by many to win the All-Ireland Intermediate title.

McCole comes from good stock – his family are steeped in boxing tradition.

The Dungloe ABC club has produced multiple All-Ireland winners – and McCole will be hoping he can add his name to an illustrious list of names.

He will fight Keane McMahon from Dublin in next week’s All-Ireland semi-final.

There was disappointment for Declan Ferry who lost his bout – and Michael Gallagher is in action tomorrow night.