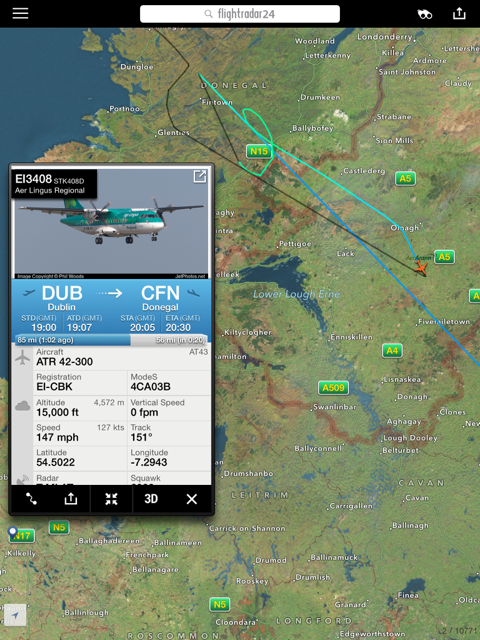 The computer image which shows the flightpath of the plane returning to Dublin from Donegal. Image courtesy of Alister Kilpatrick.

EXCLUSIVE: A plane flying from Dublin to Carrickfin Airport has been forced to turned back after it encountered tonight’s massive lightning in Donegal.

The plane, EI3408, left Dublin Airport at 7pm with a number of passengers on board.

However the Aer Lingus plane was then forced to circle a number of times over the West Donegal Airport before abandoning its plans to land.

Our exclusive picture shows the flight-path of the plane and how it was forced to return to Dublin Airport this evening.

There are local reports that the plane was struck by lightning but there is no evidence of this.

A local amateur aviation enthusiast said he watched as the plane was forced to turn back as it tried to land in the height of the storm.

“At that particular time the lightning was really really bad. Out to the west towards the coast the plane seemed to head out in the direction of the airport and I watched it circle around a couple of times before making the journey back to Dublin,” he said.