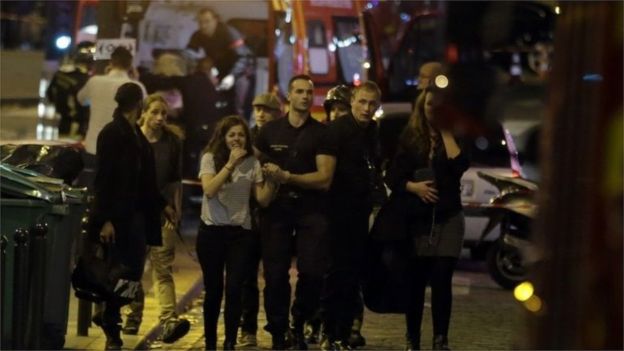 BREAKING WORLD NEWS: FRENCH media is reporting that at least 40 people have died in a series of gun and bomb attacks across Paris tonight.

There have been explosions near the Stade de France.

French media say at least 15 people have been killed near the Bataclan arts centre alone. A hostage taking is under way, with reports of up to 60 being held.

The Department of Foreign Affairs are monitoring events.

At least one man opened fire at a restaurant in the 11th district, causing several several casualties.

Three explosions are also reported outside a bar near the Stade de France.

France were hosting Germany in a friendly and the match continued. It has now ended.

An eyewitness told Liberation he had heard more than 100 rounds being fired at a cafe in rue de Charonne.

A massive security operation has swung into operation in Paris tonight; anyone from Donegal should contact the Department of Foreign Affairs.

There has been another shooting in the past 20 minutes at a shopping mall.

The series of coordinated attacks are already being linked to Islamic terrorists.