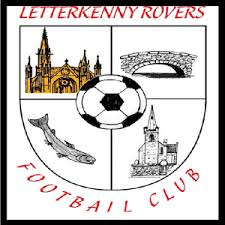 SOCCER: The club have a big away day this Sunday when Eamon McConigley takes his side to Co Meath to play Dunboyne in the FAI Intermediate Cup. Kick off at Summerhill Road is at 2pm.

The seniors drew 2-2 against Derry City Reserves at Leckview on Sunday last with Darren McElwaine getting both goals for Rovers.
The club are organising a coach to the game and any supporters wishing to travel are welcome and if interested feel free to contact any committee member.
Our Youths are also in FAI National Youth Cup action this weekend when they travel to play Swilly Rovers on Saturday. Kick off in that one is 130pm.
The u19s finished their LOI season on Saturday last losing out to Derry City 2-0. The club would like to thank everyone for their efforts throughout the campaign.
The club was well represented in a playing and non-playing capacity under manager Eamon McConigley with the Donegal Youth League side which drew 0-0 with Mayo in Castlebar.  Well done to everyone involved and lets hope progression can be secured to the next phase in the next group game.
There was no competitive schoolboys action last week but its back this weekend with the u12 Rovers facing Milford on Saturday at Leckview at 1030am while on Sunday the u12 Crusaders face Keadue in a top of the table clash also at Leckview at 1015am.

The u14 Crusaders are away to Keadue on Saturday at 1145am while the u14 United are at Ballyraine at 1130am on Sunday.
Mini Lotto numbers this week are 1-6-13-16.
2 people matched 3 numbers and receive 40 euro each.
Vincent Cassidy and Robert Stewart the lucky winners.
Next weeks jackpot is €3050
Bingo continues on Thursday nights in the Station House Hotel on Thursday night. Snowball is €1600 on 45 numbers or less.