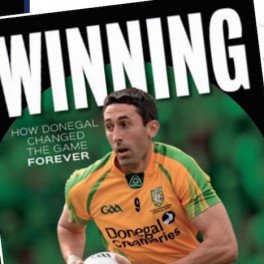 REVIEW: KAVANAGH’S BOOK IS RIVETING ACCOUNT OF STAR AT THE TOP OF HIS GAME

Kavanagh in the gold and green of Donegal

BOOK REVIEW: There are a lot of books on the market at this time of the year and it’s always hard to pick one from the crowd, but Rory Kavanagh’s book ‘Winning’ stands out from the jumble on the shelves this Christmas.

The former Donegal player was, of course, an integral part of the team which won Sam in 2012; but he was also in that squad before McGuinness’s arrival.

His book is brutally honest about every single part of his life in gaelic games; a sharp perspective of life as a player in these modern times of ever-increasing dedication.

‘Winning: How Donegal Changed The Game Forever’ is beautifully crafted, written with twists and turns all the way; it’s fun, it’s sad, it’s hard to leave down once you start.

McGuinness is much of the focus of Kavanagh’s book.

He describes first meeting McGuinness the manager and trying to square if this was the same man who had ‘completely lost it’ during a county game involving the two men just a year earlier when McGuinness was still playing.

“McGuinness, as usual, was trying to influence proceedings, especially with the referee,” says Kavanagh.

“In the second half he was going at it non-stop and we were making sure that he kept it up. We would target him no doubt. He was one of their leaders. We couldn’t let him dictate the game.”

He says McGuinness continued to question the referee.

“McGuinness was gone. He had lost all discipline, all composure, he had lost all intent of playing the game to win,” says Kavanagh who recalled the win over Glenties that year.

Less than a year later Kavanagh recalls meeting McGuinness at a Donegal hotel to discuss if he wished to continue playing with the county.

He says McGuinness told him he wanted to move him from the half-forward line to the midfield, he wanted to him eat a minimum of six times per day to put on a stone and a half and be at early morning gym sessions every day before going to work as a primary school teacher.

McGuinness repeatedly told him to ‘snip the ties’ code for an end to any sort of social life for players who had been dubbed ‘the party boys’ until that point.

“I wondered was he credible, was he believable,” says Kavanagh.

“Bloody hell – that’s what most of us (players) were thinking. Has this man changed?”

“Is this the man who is actually going to bring us to the Promised Land? That was the biggest question most of the Donegal players were asking themselves.”

“We all had concerns, all of the senior players, and we talked about them every chance we got in the first few weeks and months.”

Kavanagh details Donegal’s run to the All-Ireland in 2012 on a roller-coaster of emotions.

And he credits McGuinness – who he repeatedly calls ‘Jimmy Tunes’ because of the Celtic coach’s previous life as a DJ – and his then No2 Rory Gallagher with making his team believe they could become All-Ireland champions.

However he says he hasn’t seen or even spoken to the Glenties man since both of them left the county set-up last year.

Kavanagh walked away from Donegal after last year’s final defeat to Kerry.

“I never said my goodbyes to the other boys. I never shook one hand. I never said good luck to the ones staying on and I never spoke to Jim McGuinness.

“We were in one another’s company for the longest three days of our lives and I never once put my hand out to him. Or thanked him deeply and personally.

“And I have never met the man since.”

Kavanagh also criticises the All-Star selections of 2012, believing he should have won one in a year he landed both All-Ireland and county club championship and league medals.

His partner in midfield Neil Gallagher was nominated.

“A pair of midfielders from a winning All-Ireland team never get recognised together,” says Kavanagh.

He says not being recognised ‘hurt’.

“I did not expect it to hurt as I walked away from Croke Park one month earlier. Nor in the days that followed did I or anyone else give a damn,” said the 34-year-old.

“But one month later when you do not get an All Star it is surprisingly disappointing. I felt I had done enough.

“I did feel I had done more than Aidan Walsh from Cork who was named as Neil’s midfield partner. It was Walsh’s second.

“It’s a selfish game at heart. Football, they say, is a team game and there is no ‘I’ in ‘team’ but that’s not strictly true.

“Everyone has to be bloodthirsty in their own right to be the best they can be, and that is what makes a team.”

A riveting read, this is no stocking-filler. It’s much more than that.

REVIEW: KAVANAGH’S BOOK IS RIVETING ACCOUNT OF STAR AT THE TOP OF HIS GAME was last modified: November 26th, 2015 by John2