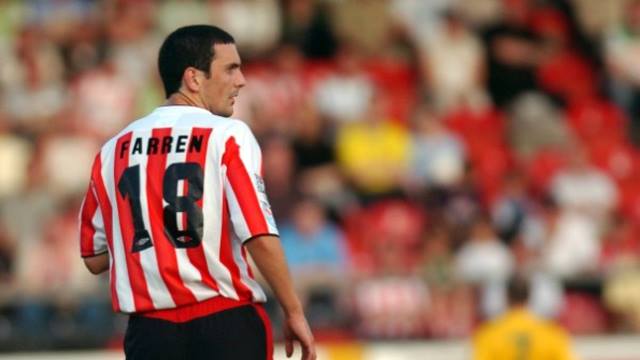 DERRY CITY RETIRE NO.18 JERSEY IN MEMORY OF MARK FARREN

Derry City have announced that the No.18 jersey worn by their legendary strker Mark Farren will be retired following his tragic passing yesterday morning.

The footballing community in the North-West, and all over Ireland are still trying to come the terms with the devastating loss of one of the finest footballers Donegal has ever produced.

There has been an overwhelming outpouring of grief for the Greencastle native who became Derry City’s all-time leading goalscorer.

Derry City officials have decided as a mark of respect to their greatest marksman to officially retire the No.18 jersey.

The club released the following statement, “Derry City Football Club have made the decision to henceforth retire the Number 18 jersey worn by Mark Farren during his time at the club as a tribute to the club’s all time leading goalscorer. ‪#‎Farren18

Former Derry City manager Stephen Kenny described Farren as the best finisher he has ever worked with, and said he was so understated and was a absolute gentleman.

Farren’s funeral will take place tomorrow morning, with hundreds of mourners expected to attend to say their farewells to one of Donegal’s greatest sons.