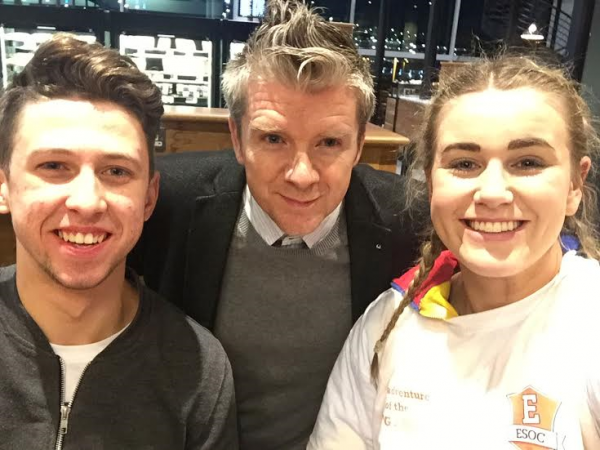 DONEGAL GIRL GETS TO BERLIN, VIA LONDON AND PARIS BY BEGGING AND BORROWING! 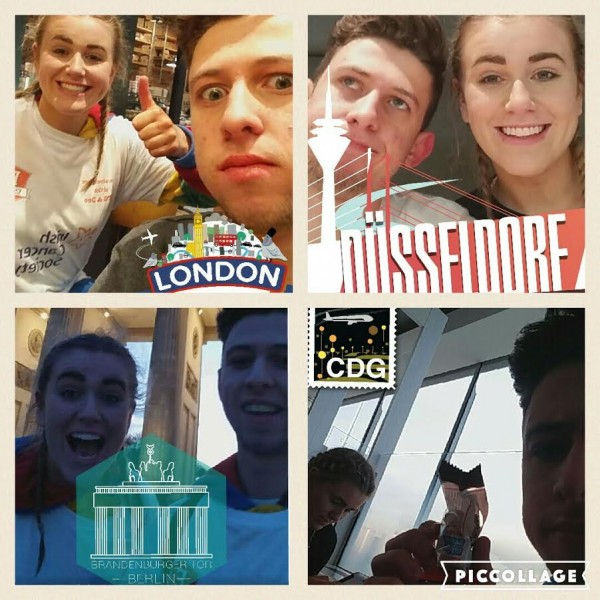 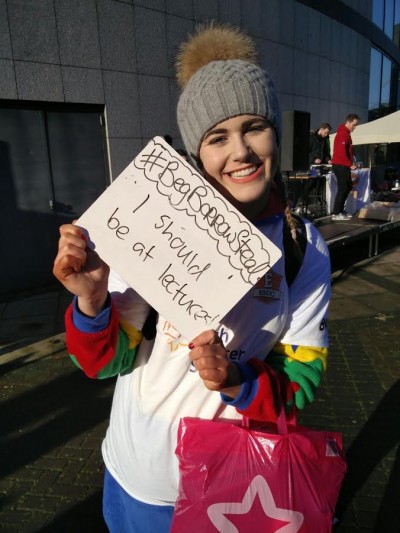 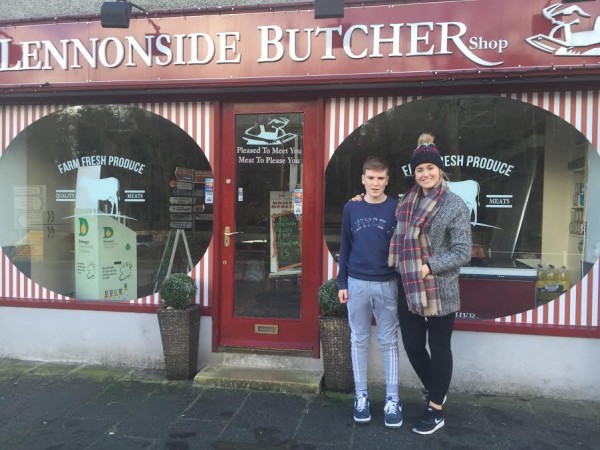 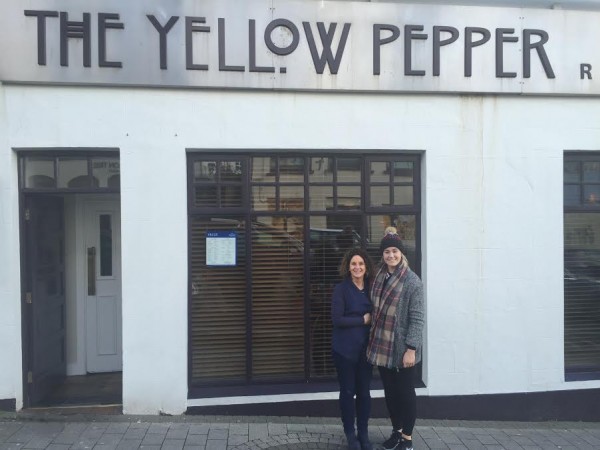 A Donegal girl has embarked on an incredible journey to help raise over €50,000 for The Irish Cancer Society.

Sinead Hession, from Letterkenny is a student at DCU and was part of the fantastic fundraising initiative called ‘Beg Borrow Steal’.

Basically, sixty-two teams left the campus with the one goal of reaching Berlin as quickly as they possible could.

Only problem is none of the teams had any money, hence why it was called Beg Borrow Steal.

Thankfully though, with the help of some Donegal businesses – Sinead and her team got to Berlin and helped raise a staggering amount of money for The Irish Cancer Society.

On the 10th of February, DCU’s Helix was swarmed with colourful onesies, crazy costumes and enthusiastic students all eagerly waiting to take part in Beg Borrow Steal.

At 11am sixty teams of two left DCU with one end goal in sight, making it to Berlin solely relying on the kindness of other people in under 30 hours.

This charity event was organised by the Enterprise Society in DCU and prior to the event, over €50,000 was fundraised for the Irish Cancer Society by the participating students.

Students were required to reach two mystery checkpoints on their journey. Moments before we were due to leave, the first three options were announced.

The Titanic Museum, Belfast; Old Trafford, Manchester; Buckingham Palace, London. Myself and my teammate had a plan.

We would make our way into Dublin City to try to fundraise money.

We hitched a lift to Leeson Street and we approached businesses asking them to sponsor us €10/€15/€20.

We spent one hour in town, raising €240, before deciding we should make our way to the airport.

Custodian, one of the business that we approached for sponsorship, offered to organise a corporate Taxi to collect us.

We kindly obliged, and we faced our next task, getting flights to London.

While in Dublin Airport we met several teams scrambling money together to pay for flights and frantically calling companies to sponsor flights to the first checkpoint of their choice. We were a few minutes too late to buy the 3:30 Aer Lingus flights to London.

We had no choice but to settle for the 4:30, which at that time we thought was the worst outcome.

We tried to keep our faith that everything happens for a reason and the two hours that followed proved this theory.

Seamus Cosgrove was the gentleman sitting beside us.

Over the next hour we explained the reason behind our mad costumes, shared the details of the charity event and discussed our plans for the coming hours.

We learned that Seamus is the Country Manager of Alcatel ONETOUCH, and little did we know that this company would be there for us in our hour of need.

Upon reaching our first checkpoint, Buckingham Palace, we were at our wits end with £9 between us and night time quickly approaching.

We updated Seamus on our progress thus far, and revealed the options for checkpoint two; Amsterdam, Paris or Prague.

Within 10 minutes we received word back from Seamus and Alcatel ONETOUCH with details of the flight passes that they sponsored for us, from Luton Airport London to Paris. Getting to Luton Airport with £9 was our next challenge.

Luckily we approached a Taxi man who kindly offered to take us to Victoria Coach Station free of charge.

Bus tickets were £11 each, we tried to negotiate with the ticket seller in the station, but after no luck we gave in and converted our last €20 into sterling which gave us the exact amount we needed, and off we headed to Luton Airport at 11:30pm.

Our flight to Pairs was at 6:50am. We reached the airport by 1am, and set up camp in the Starbucks.

A four chair train made for an uncomfortable bed but it was our only option. Exhausted after a day on our feet, it wasn’t long before we nodded off for an hour or two. Our parrot onesies attracted looks from all directions and conversations were sparked.

After hearing our story, a young Brazilian student and her mother bought us breakfast which we were very grateful for.

This would be the fuel that we needed for the following hours.

We arrived in Paris at the local time of 9:45, with no money, no food and no water. Stress levels were reaching new highs and we were feeling the pressure of our reality, that we were essentially stranded in Paris.

During a call to the parents to tell them we were alive, we realised that the closest and cheapest flight to Berlin was at 1pm.

However they were €200 each. We found a quiet area, sat down and devised a plan of action.

The only way at this stage was to acquire sponsorship from companies at home. We frantically began ringing local companies proposing the most unusual business proposition they would ever receive.

In return for their sponsorship we would promote their company in our social media campaign.

Without the generous donations from some of Donegal’s local companies, we would not have made it to the finish line.

In a short 40 minutes we had fundraised enough money for our flights. Thanks to the Yellow Pepper’s Carol and Kieran Davis for their help. Lennonside Butchers of Ramelton generously sponsored us in our time of need.

Conor and Lucinda McGettigan of McGettigan’s Gala kindly helped us. The Grill Letterkenny also aided us in the final stretch of the race.

Thanks to these amazing businesses from the bottom of our hearts, for their sponsorship. God knows how we would have reached our destination without them!!

Completing the race in 29 hours and 28 minutes, was an amazing feeling.

This experience is one we will never forget. This event was due to take place in November, but due to the unrest in midlands Europe surrounding the Paris shootings and the bomb scare in Berlin, the event was postponed.

Travelling across Europe with no money and meeting so much kindness along the way has restored our faith in humanity without a doubt.

People are kind and will help you if they can. All you have to do is ask. This experience is one we will carry with us forever and without a doubt it was the best 48 hours in our college life so far.

Without their generosity and support we would not have made it out of Dublin. We may not have come first in the race, but all teams taking part were winners.

Being part of a group raising over €50,000 for the Irish Cancer Society and Movember Ireland is an amazing feeling. A feeling I will never forget.

DONEGAL GIRL GETS TO BERLIN, VIA LONDON AND PARIS BY BEGGING AND BORROWING! was last modified: February 22nd, 2016 by Stephen Maguire
FacebookTweetLinkedInPrint
Tags:
BegBerlinborrowcharityDCUFeaturesnewsSinead Hessionstealstudent