The remains of the Volkswagen Passat in which seven young people died. PIC. Newspix

An inquest into Ireland’s biggest ever road crash has been adjourned amidst claims of a cover-up.

The extraordinary claims were made by solicitor Ciaran MacLochlainn at the inquest into the deaths of eight people which started in Buncrana today.

It followed evidence given at Inishowen Coroner’s Court that the inquest will hear from just 14 witnesses despite there being 200 witnesses in the case of the crash between Clonmany and Buncrana on the evening of July 11th, 2010.

Eight people including seven friends in one car and another man returning from playing bingo died in the smash which was the single biggest loss of life in a car crash in the history of the state.

The driver of the car, Shaun Kelly, of Hill Road, Ballymagan, Buncrana, now 27, is currently serving a jail sentence after pleading guilty to dangerous driving causing the deaths of the eight men. 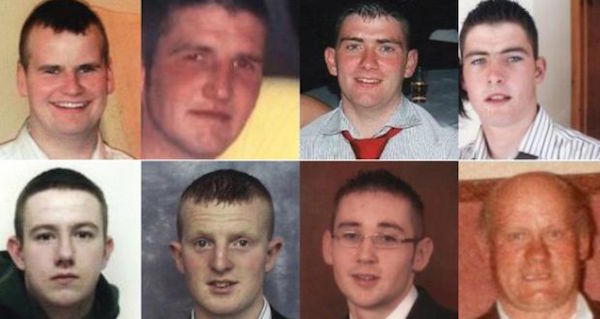 The eight men killed in the crash.

Solicitor Ciaran MacLochlainn objected to the inquest going ahead after hearing the only ‘edited’ version of witness statements were being read into the court record.

He said that full depositions must be given to help the families so they can finally have some closure.

“There is stuff left out, stuff changed and material being introduced that should not be introduced,” he said.

He then claimed the process was being manipulated by certain witness being called and others excluded.

A number of family members of those killed on the night also objected to the inquest going ahead without key witnesses being present.

Mr Eamon Sweeney, father of one of the victims, Ciaran Sweeney said the families needed all the evidence including the full statements in their entirety.

“Otherwise we will go out that door with more questions than we came in with,” he said.

Ms Philomena McEleney, mother of victim James McEleney, said she was there for her son and she wanted to know the full truth.

“He is my flesh and blood and we have a right to know everything that happened,” she said.

A number of family members requested the presence of Ms Ann McGilloway who was driving a car on the same road just seconds before the horrific crash.

A spokesperson for Ms McGilloway said she had been called to the inquest but not summonsed.

However coroner Dr Madden said she had now been summonsed to appear.

Solicitor Mr MacLochlainn had earlier tried to stop the inquest from going ahead without the evidence of Shaun Kelly.

Mr Mac Lochlainn told the court, sitting in the Inishowen Gateway Hotel in Buncrana, that Mr Kelly, had been at every court sitting during the case and was entitled to be at the inquest.

He asked that Mr Kelly be brought to the inquest and allowed to give evidence saying it was “simply unfair” that it went ahead without him present.

However coroner Dr John Madden refused the application saying that he decided what witnesses gave evidence at the inquest.

He said that Mr Kelly remembered nothing about the accident on July 10th, 2010 saying that he could not answer any of the evidence if he had no memory of the events.

Dr Madden said he was refusing the application but said he will have the objection noted.

As the inquest started, members of the bereaved families asked who were entitled to ask questions as they had never been at an inquest before.

Dr Madden said people could raise their hands from the floor and ask questions and they would be answered as best as they could.

The first person to give evidence was Dr Gerry O’Dowd, chief pathologist at Letterkenny General Hospital who, along with colleague Dr Abdullah, carrie out the post mortem after the men had died.

He outlined the pathology reports for the eight victims.

The causes of death found that all died from multiple injuries consistent with a road traffic accident.

Dr O’Dowd paid tribute to the staff at Letterkenny General Hospital saying “I’m happy to say that we never had a day like it in Letterkenny and I hope we never have another like it.”

He offered his sympathies to the families and was thanked in turn.

A number of witnesses were called but the court was told that they could not all be there.

Instead some of their statements were read to the court by Garda Inspector David Murphy.

They included two people who had been at the scene in the village of Clonmany when Mr Kelly’s back VW Passat car left the scene to go to Buncrana.

Her statement revealed how she heard a “massive’ sound of a car revving its engine and then speeding off.

Another witness who could not be there, Jim Grant from Clonmany, had just collected his wife from Derry Airport when he passed a speeding car.

His statement revealed how he met a car at a round 10.38pm on a series of bends and it was hugging its own ditch.

One witness who did turn up to give evidence in person, James Gallagher from Derry, told how he had been returning from a birthday party at Ballyliffin when a came “came up his arse.”

He added that the car then proceeded to pull out in a “jerky fashion” and pulled off and he remarked to himself “If you don’t slow down, you’re going to kill someone.”

Second later he saw a car coming towards him and it was smoking badly before being met a few yards up the road by debris.

He got out of his car and then heard a hissing noise before discovering two cars in a ditch, a red car was upside down on top of a black car.

He asked his wife to call the emergency services and the Gardai arrived ten minutes later and he left the scene as his wife was very distressed.

Dr Madden then directed that Gardai furnish all the families with the full depositions from the 14 witnesses.

He then adjourned the case until tomorrow morning.