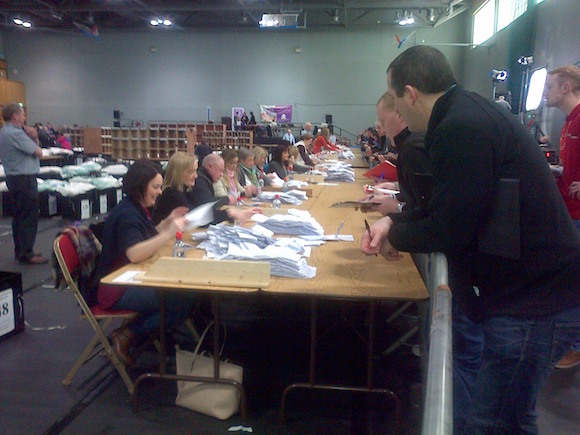 The work gets underway at the Aura Centre in Letterkenny.

CHARLIE McConalogue is out-polling Padraig MacLochlainn by up to three votes to one, according to tallies from opened Inishowen ballot boxes this morning.

“Charlie is cleaning up in Inishowen,” according to one Fianna Fail tallyman.

“We knew he was doing well but not this well.”

Tim Jackson is also picking up votes, with many of his transfers going to Shiels. Mr Shiels is also getting a decent vote in Inishowen. His wife is a GP in Moville.

Counting has been underway at Aura Leisure Centre in Letterkenny since 9am.

Workers from across the parties are working together on estimating the vote before the real one gets underway.