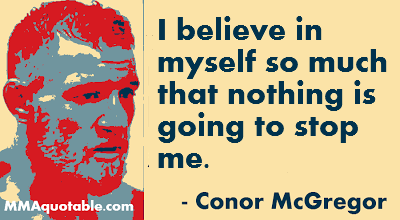 EMMET RUSHE: WHAT WE CAN LEARN FROM CONOR McGREGOR’S LOSS

BY EMMET RUSHE: In the early hours of Sunday morning, Conor McGregor suffered his first defeat in the UFC.

Conor’s scheduled bout against Rafael Dos Anjos was postponed 2 weeks ago, when Dos Anjos suffered a broken foot in training.

Nate Diaz was drafted in last minute and the highly skilled Gracie fighter was a very worthy and dangerous opponent.

What made the fight impressive on McGregor’s part, was the jump from his usual 145lbs weight division where he is the current undisputed champion, to 170lbs so he could face Diaz.

At 4:12 in the 2nd round Diaz submitted McGregor via Rear Naked Choke and ended McGregor’s 15 fight win streak.

If you were on social media at all yesterday, you couldn’t have missed the fact that McGregor lost his fight.

His loss was trending on several different platforms as people jumped to defend him and gloat, all at the same time.

This is something that everyone will come across whenever you set out goals that you want to achieve.

It is especially prevalent whenever you start on a weight loss goal.

In the post-fight press conference. McGregor said “I’ve been on the end of many defeats in my life and I’ve rose back. I will not shy away from it. I will not make excuses.”

This type of mind-set is very important when you are setting goals.

It doesn’t have to be big, but failure or obstacles are usually there.

How you handle that failure is what will make or break your chances of success.

One of the most common examples of this is when people are trying to lose weight.

They have pre-conceived ideas of how much they should lose and how quick they should lose it and if that doesn’t happen, quite often they either give up or fall off the wagon for a period of time.

What they are missing, Is the fact that weight loss was still there, just not in the amount they expected.

Success was there in small amounts, but their mind-set viewed it as failure.

“I thought I took him the first round. I’m humble in victory or defeat,” McGregor said. “I took a chance to move up in weight and it didn’t work.”

The thought of taking risks can be the biggest obstacle whenever we want to achieve something.

The fear of failure and the fear of what others will think of us if we do fail can be frightening.

It can be our sticking point every time we try to start, but if we don’t take risks and actually try, how will we ever know if we can succeed?

It comes back to the fear of failure and the discomfort that comes along with it.

It is easy to think about doing something.

It is another thing altogether to get up, start, and keep going until you succeed.

The reward at the end of that far outweighs any uncomfortable feelings you may get from actually starting.

“I will celebrate this loss as I would with any victory. You shouldn’t shy away from adversity, it makes you stronger and you grow and learn from it.”

The learning process from failure is an important thing.

It’s how you learn to improve.

It’s how you learn to change your path to improve your chances of success.

The main thing to remember is that how you look at these things, how you approach them, accept them and deal with them, will be your ultimate test of character and will be another step on your road to success.
#TrainSmart

If you have any question on this article or on getting a tailored program based on your starting point, please contact me through the link below.
https://www.facebook.com/Rushe-Fitness-120518884715118/?ref=hl

EMMET RUSHE: WHAT WE CAN LEARN FROM CONOR McGREGOR’S LOSS was last modified: March 6th, 2016 by John2