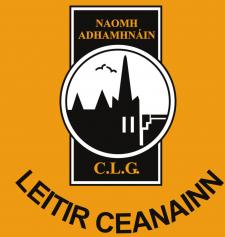 Well done to the U21 footballers last night with both Conor Morrison and Conor O’Donnell in the starting line-up while Rory Carr continues his recovery from a shoulder injury. Next up is a meeting with All-Ireland U21 champions, Tyrone.

Anyone interested in marching with the club today in the St. Patrick’s Day Parade should be at Tobin’s Service Station no later than 2pm. Wear club colours.

Thanks to everyone that helped out on Sunday to make the day a great success as we hosted the Football & Hurling double-header for the Donegal teams. Unfortunately, the results didn’t go our way.

The Senior and Senior reserve footballers begin their respective league campaigns this Sunday with a trip to Gaoth Dobhair in All-County Div. 1 & Div. 1 Reserve. Best of luck to David McGinley and his management team.

The Minor Football Dev. Team were narrowly beaten in Convoy last week in a thrilling game, they travel to Red Hugh’s in a game scheduled for Monday, March 21st at 6pm. The Div. 1 team had no game last weekend and are also due to play on Monday night at home to N. Colmcille.

The Senior Board Presentation that was due to take place in the Clubhouse on St. Patrick’s Night has been put off until Saturday, April 9th. Our Junior men’s footballers and U21 Hurlers have their county medals to collect. Pat Connaghan, who won championships in 1969 and 1972 will become the latest member of our Hall of Fame.

Well done to our players that represented the Donegal Minors and U17’s in Ballyshannon against Fermanagh last Saturday. Both teams had comfortable wins with Niall O’Donnell among the goals for the minors. Both teams are free this week before meeting Tyrone the following week.

Well done to our members who were on the Donegal U14 Girls team that won the Ulster A Championship Blitz on Saturday in Cookstown. The girls take on Derry at 3pm this Saturday at Coláiste Ailigh with the Dev. Squad meeting Fermanagh at 1:30pm. Eunan’s have 8 girls between the two panels.

Our U12 girls football will commence training on Thursday, April 7th between 6pm and 7pm each week. New members are always welcome.

The Friday Evening Hurling & Camogie Academy has now finished indoors and will begin outdoors in O’Donnell Park on Friday, April 1st at 6:30pm.

This Sunday (March 20th) is the last indoor session for the Century Cinema’s Sunday Morning Football Academy. It will take a break for Easter Sunday and return outdoors at 11am on Sunday, April 3rd.

The Clubhouse is available for bookings and is a great venue for your function with our fantastic, upgraded facilities. For bookings contact Niall on 086-306 2893.

If anyone has any expertise in website management, please contact PRO Paul McGovern asap and if anyone has particular IT Skills that they feel would be of benefit to the club, please get in touch on 086-811 4151 or by e-mail: pro.steunans.donegal@gaa.ie.