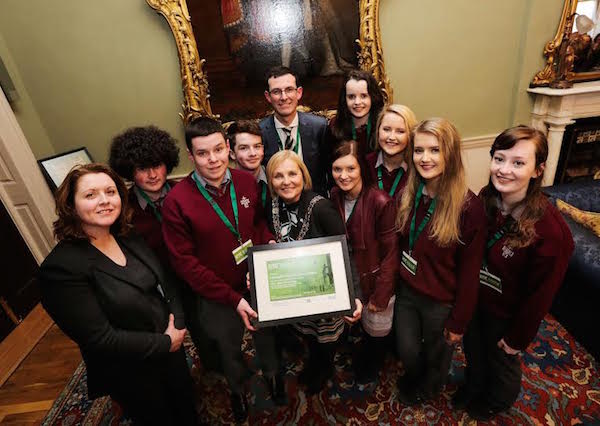 Pobalscoil Chloich Cheannfhaola have been awarded a special prize of €200 in the RTÉ Raidió na Gaeltachta 1916 Schools’ Radio Competition.

They were presented with their prize by Lord Mayor of Dublin Críona Ní Dhálaigh in a programme live from the Mansion house in Dublin on Easter Monday.

In her speech, the Lord Mayor praised the schools in the competition for all their work.

“It’s important that we are reflecting on what has been achieved in this country over the last 100 years, and what we have yet to achieve to ensure equality for all who live here. It’s vital that the next generation, all of you here today, are also addressing these questions.”

“It’s a great matter of joy to me personally that all this work has been done through Irish. It’s clear that you all appreciate the importance of language and culture, and I hope that you will carry that with you throughout your lives.”

Pobalscoil Chloich Cheannfhaola put together a programme about local man Charlie McGee from Inis Bó Finne, who was shot dead on Easter Monday 1916 in Co. Louth.

The judges said that the programme told the story of Charlie McGee very effectively, and praised the fact that it was a story from their own locality.

Although it was only intended to present one overall prize of €1000 in the competition, which won by Coláiste Íde in Kerry, the judges were so impressed with two other programmes that they awarded them €200 each – Pobalscoil Chloich Cheannfhaola and Coláiste Íosagáin in Dublin.

The judges were Seán Ó hÉanaigh, Áine Hensey and Cormac Ó Comhraí. Seven schools in total went through to the final round of the competition, and got the opportunity to put together a radio programme to be broadcast on RnaG.

You can listen to the programmes in the series 1916: Dearcadh na hÓige on the RTÉRadio player on the RTÉ Raidió na Gaeltachta website www.rte.ie/rnag