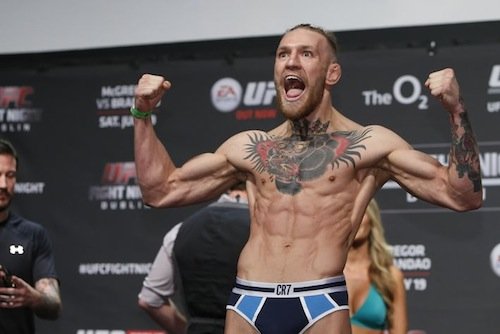 ‘I WILL FIGHT HIM ON THE BEACH’: McGREGOR TO TAKE ON DUFFY ON ARRANMORE ISLAND!

EXCLUSIVE: MMA superstar Conor McGregor will be on Arranmore Island today – to announce a fight with local lad Joseph Duffy in a sensational decision which will see up to 100,000 fight fans descend on the North West this summer.

McGregor and Duffy will travel on separate ferries to the island this morning – McGregor on the blue ferry and Duffy on the red ferry – for a noon press conference announcing the July date for the fight.

McGregor posted on Facebook earlier this morning that he was “fed up” with Duffy and said he was looking forward to going to Arranmore “to punch his lights out in his own back yard”.

Duffy left a comment in response which we are unable to repeat here.

Fight promoters MMA International say they are in discussions with gardai and Donegal County Council about staging the fight on a beach on the island this summer.

They say they are confident of getting a foreshore licence from the Department of the Gaeltacht and the Marine.

More than 170 journalists from around the world are expected on the island today just for the press conference.

Joseph Rosario, editor with MMANews.Com, was staying in a B&B in Dungloe last night ahead of the press conference.

“You guys don’t know what’s about to hit you,” said the New Yorker.

“This is going to go all over the world.”

A spokesman for the island’s Council said: “We can confirm a press conference later today but we cannot comment at this stage on what it’s all about but it’s going to be some craic.”

In a rare joint statement TD Pat the Cope Gallagher and Cllr Marie-Therese Gallagher (no relation) said: “We believe Friday’s announcement is going to be brilliant.

“We just hope it doesn’t kick off at the press conference; and they save the real fighting for later in the year. It’s a wonderful way to start April.”

‘I WILL FIGHT HIM ON THE BEACH’: McGREGOR TO TAKE ON DUFFY ON ARRANMORE ISLAND! was last modified: April 1st, 2016 by John2