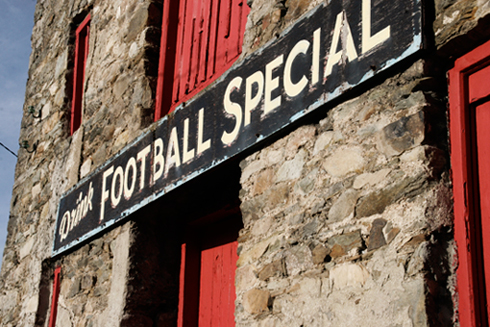 SHOCK AS FAMOUS ‘FOOTBALL SPECIAL’ BUILDING PUT UP FOR SALE

THE home of Donegal’s famous ‘Football Special’ drink has been put up for sale.

It is the end of an era this week in Ramelton as a number of the town’s most historic properties have been put up for sale.

The properties including ‘McDaid’s Bottling Store’ and ‘The Guildhall’ have been in the McDaid family for generations.

The five buildings owned by Edward McDaid are being sold with a price tag of €770,000.

Meanwhile another well-known Ramelton business, the Lennon Lodge has also been put on the market this week.

The proprietor, Seamus Durkan said the business with 14 bedrooms, bars and dining facilities is being sold as a going concern. A guideline price will be advertised in the coming week.

Edward McDaid who owns Conway’s Bar is retiring from business said that he hopes a new owner will preserve these legendary buildings, retain their character and develop them for a new generation.

Mr. McDaid is to retain the family interest in the soft drinks brand of ‘Football Special at ‘The Creamery’. This week Edward recalled how his grandfather, James McDaid arrived in the town around 1910 and purchased a house and small shop where the off-licence is now located.

He tells today’s Tirconaill Tribune that it has been a very historic journey and over the years and at three generations of the Ramelton community were employed in the many and varied McDaid enterprises.

The original buildings some of which date back to the 1770’s are an integral part of Ramelton’s Georgian architecture and stand as a reminder of the town’s commercial shipping trade of a hundred years ago when the Quayside was the busiest place in Donegal.

One of the properties, the Guildhall was used extensively in the famine documentary, The Hanging Gale. The building dates back to the seventeen hundreds and formerly housed the Ramelton Assizes Court.

It was the seat of the Grand Jury until the abolition of the system in 1898.

The Guildhall is also where the historic meeting was held that led to the building of the Town Hall in 1878.

The other properties include Conway’s Bar and off-licence, the Bottling Store, the Geanology Centre, the Guildhall and the Swilly Stores. They are among Ramelton’s best known landmarks on the Quay and form part of the town’s Georgian history.

These properties have been in the ownership of the McDaid family for generations and their sale marks the end of an era.

At the centre of the commercial viability of the properties is Conway’s Bar, built with stone and roofed with thatch. It is one of Donegal’s most pictured buildings and has featured on post card scenes and in film settings.

The bar is currently leased and it was completely refurbished in 2008.

The Bottling Store is one of Ramelton’s best known locations: it is three storey stone building with a frontage onto Shore Road and The Quays. The entire site, Conways Bar and Bottling Store had planning permission for a micro brewery, pizza, restaurant and quay fronting apartments. These properties are being sold as one lot.

Also on the market is the former home of The Donegal Ancestry. It is located on The Quays and facing directly onto The River Lennon. Until a few years ago it housed the Ancestry Centre and Genealogy Administration Office. The entire structure was rebuilt in 2000 within the original stone walls retaining the authentic facade.

Steeped in heritage the smaller building was known as “The Steamboat Store” and was in fact the quayside warehouse for the Londonderry and Lough Swilly Railway Company dating from 1864.

The Guildhall is a two storey, stone built property with frontage onto Castle Street and Market Square. The building dates back to the 18th century and formerly housed the Ramelton Azzizes Court.

This property needs complete refurbishment and redevelopment said Mr. McDaid. Also included in the sale is the adjoining yard which opens onto Castle Street.

McDaid’s Bottling Store is an iconic vision on the Quay and forms a major part of the majestic landscape here for generations.

The impressive towering three storey stone built building is derelict but is seen as an ideal site for redevelopment as up market apartment type accommodation. Also included in this sale is the nearby walled garden which is circa 1650 sq ft
Another two-storey building – formerly Swilly Stores is also on the market with a price tag of €60,000.

Up the street at Market Square the Durkan family moved into the pub business in Ramelton eighteen years ago with the purchase of ‘The Mellon Bar’.

The premises was extensively reconstructed with the addition of 14 bedrooms, three bars, dining room, modern kitchen and ample parking.

The premises is ready ‘to move in’ and refurbishment has recently been completed.
Seamus Durkan says that it is time for him to move on and consider retirement.
He says the Lennon Lodge is an ideal chance for a young couple with an interest in the business to come in and build on what has already been achieved.

“There is there is plenty of scope for developing that catering and bar trade with a strong clientele in Ramelton,” he said.