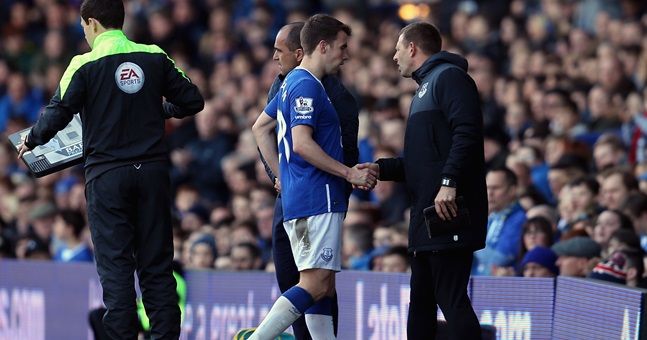 SEAMUS Coleman suffered a hamstring injury and limped off in Everton’s 1-1 draw with Southampton at Goodison Park today.

The injury sparked fears he could miss Euro 2016, but the news from Merseyside this evening is that the injury is bad – but not that bad.

However he could miss the FA Cup semi-final against Manchester United at Wembley next weekend.

Coleman was replaced by debutant Callum Connolly after 54 minutes.

Coleman has had a history of hamstring injuries and it would not be surprising to see the Donegal man kept out of action for both Wednesday’s Merseyside derby at Anfield and the trip to Wembley.

After Coleman left the pitch, Everton centre-back Ramiro Funes Mori gave the home side the lead against the run of play with a deflected shot off Ryan Bertrand.

Southampton equalised when Sadio Mane swept in a shot and had to settle for a point despite plenty of pressure.