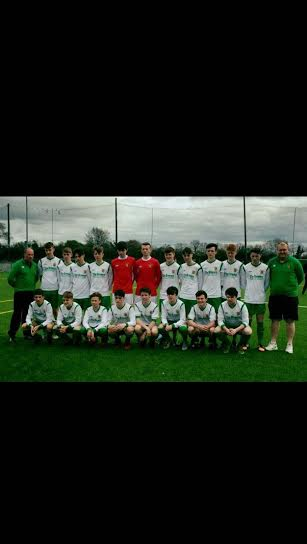 DONEGAL SCHOOLBOYS BOW OUT ON PENALTIES AFTER TITANIC BATTLE IN KILKENNY

FOOTBALL: Donegal schoolboy’s league U16’s (2000) bowed out of the Paul O Neill cup at the ¼ final stages yesterday after a titanic battle in Kilkenny.

Played on the very impressive, but very small 4G pitch at Evergreen F.C, this game was a tremendous advert for underage football.

A tremendous ball from keeper Eoghan Jordan played through Ryan Toye, he took the ball around the keeper but from an acute angle he saw his shot go narrowly wide when everyone in the ground thought that it was in.

Just 2 minutes later Donegal should have again got on the mark. A fine shot from Toye saw the Kilkenny keeper parry the ball, Mark McFadden was following up to tap it over the line but an excellent tackle from a Kilkenny defender put the ball out for a corner.

This corner would be one of 10 Donegal had in the first half and saw Ethan Harkin head just over. Donegal were dominating proceedings and Ryan Toye was causing chaos for the Kilkenny defence and he was lucky to avoid a serious injury when a Kilkenny player caught him in the face with studs as he was going through on goal again.

Kilkenny were gradually getting into the game but Donegal continued to miss chance after chance.

As is always the case you get punished for not taking your chances and on 27 minutes Donegal were caught out when a simple ball through the defence saw the excellent Ciaran Brennan shoot low past Jordan.

It was totally undeserved and very harsh on the Donegal lads who had dominated up until this. Brennan, who has signed terms with Manchester United and was fresh from scoring twice for the Rep of Ireland U15 against the Czech Republic last week was a real threat.

Incredibly just 57 seconds after his first goal, he grabbed his second when again the Donegal defence were caught sleeping at a throw in and he shot low to the corner.

This lifted Kilkenny and they had the better of the remainder of the first half. The extremely tight pitch meant that Donegal’s key playmaker Connor McKinney couldn’t get the space to pick passes.

Numerous chances were created with McFadden, Toye, Grant and O Reilly all going close. On 53 minutes Edward O Reilly linked well with McCafferty and was going through on goal when he was brought down by the Kilkenny centre back.

This was his 2nd yellow card and in a double blow to Kilkenny, Ryan Toye curled a majestic free kick into the corner of the net to get Donegal back in the game. Donegal were rampant now and O Reilly and McFadden were running riot on the wings.

On 67 mins a deep free kick from Ethan Harkin found Edward O Reilly on the far side of the box and he scored with an absolutely wonderful volley reminiscent of Marco Van Basten in Euro 88.

Kilkenny were a spent force and there looked like only 1 winner from now on. The Kilkenny management made some changes and they decided to sit in and hit on the break. The tight nature of the field meant that even with 10 men, Donegal couldn’t stretch the Kilkenny team to take advantage.

Donegal spurned numerous chances and despite 14 corners in the 2nd half, the game went to extra time.

Again Donegal dominated possession with Kilkenny looking to hit on the break. There were numerous half chances but with Kilkenny packing the defence, Donegal just couldn’t get a clear effort on goal. With 2 minutes left Aaron McCafferty had a glorious chance from 2 yards that somehow was deflected over for a corner. The game went to the dreaded penalties and the Kilkenny keeper was the hero saving twice from the spot. It was very harsh on the Donegal players who but for 57 crazy seconds totally dominated the game.

The team and management would like to thank Kavanagh’s SuperValu Dungloe for their sponsorship of match day hydration and nutrition.