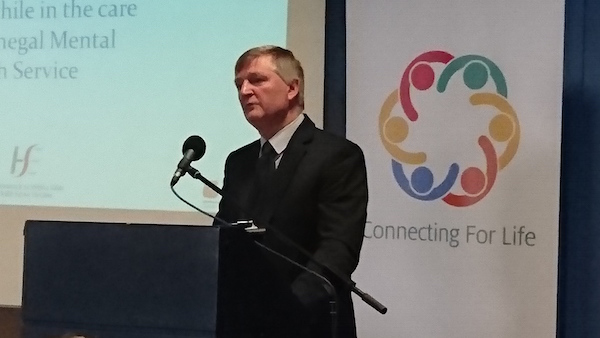 A study of untimely sudden deaths and people who took their lives while in the care of the Donegal Mental Health Service has found that almost half died less than one month after they disengaged with the services.

The finding was part of an overall report produced on the study launched today examining a total of 34 deaths between October 2011 to May 2015.

The launch took place at Education Centre, St Conal’s Hospital, Letterkenny and was attended by representatives from the HSE, the community and voluntary sector and various other interested parties.

The study was commissioned by the DMHS, funded by the National Office for Suicide Prevention (NOSP) and conducted by the National Suicide Research Foundation (NSRF) and led by Professor Ella Arensman, Dr Colette Corry and Ms Eileen Williamson.

The study came about following concern within DMHS about the sudden and untimely deaths of a number of service users.

A total of 34 deaths were included in the study, and 24 family informant interviews took place.

Of these deaths, 13 or 44% took place between one day and a month of people disengaging with the mental health service.

The study involved obtaining data from multiple sources of information including clinical records, coroner’s records and information from healthcare professionals who had been in contact with the deceased prior to death.

Most importantly, interviews were conducted with the next of kin to obtain information on their deceased family member, including their experiences of the treatment received, and to ensure that families were aware of support services available.

Also, a review of media reporting during the time of the study was also conducted.

The summary report includes an outline of the key findings and recommendations of the study. The findings revealed that no single factor dominated the cases examined. Each case had a complexity which underlined that the recommendations and actions needed a multifaceted and collaborative approach.

Speaking at the launch Dr Clifford Hayley, Executive Clinical Director of DMHS said unexpected tragic events with adverse outcomes present a huge challenge to individuals, health services, families and communities who are striving to do their best in stressful circumstances.

“This research has examined in depth and in detail those tragic circumstances that no-one personally or professionally ever wishes to face. We will continue to act upon the recommendations to ensure they are implemented fully. Thus enabling the DMHS to enhance and improve the supports offered to families bereaved, ultimately improving the prevention and treatment programmes that we offer’.

The following are the key finding relating to those who died during the period which was reviewed between 2011 and 2015.

• A total of 34 deaths were included in the study and 24 family informant interviews took place. With the approval of next-of-kin, General Practitioners were also contacted for additional information relating to the deceased. This information was then analysed along with information obtained from medical records and coronial files.

• Younger men up to 41 years old were overrepresented among those who had died by suicide or sudden unexpected death.

• Almost half of the cases being examined were known to abuse both drugs and alcohol prior to death while one fifth had abusive or dependent issues with a single substance.

• History of self-harm was known in three quarters of the deceased, with over half having a previous medically recorded episode of self-harm in the 12 months prior to death.

• The vast majority of cases had at least one psychiatric in-patient admission, with multiple admissions being more common among the middle-aged group.

• Nine deaths occurred during the first two months of discharge from the psychiatric unit.

• Psychiatric diagnosis was confirmed in all 34 cases, with the majority also having a secondary diagnosis. Depression and substance abuse were most frequently reported in both categories

The DMHS has now commenced implementing a number of actions as a matter of priority following the findings.

It is also hoped that these findings and recommendations will be accessed by other health service executives across the country.

· A series of staff briefing sessions have taken place to inform staff of the findings and recommended actions from the study and to ensure their support and commitment in the implementation.

· A comprehensive training package will include additional training in suicide risk assessment which will be tailored specifically to experience and level of expertise in both community and in-patient settings. This will address the complexities of treating service users with dual diagnosis and facilitate a collaborative, multi-agency approach.

· An Information pack for families is being developed to address concerns identified by family members.

· Contact with and support for bereaved families will be intensified as a matter of priority.

Gerry Raleigh from the NOSP said the study is an important initiative by a mental health service determined to learn how it can improve service delivery to prevent suicide.

“The study provides valuable learning that could be applied in other mental health service settings throughout Ireland. This study supports Connecting for life Donegal, the local suicide prevention plan and outlines priority actions to implement a key goal of the plan which is to ensure safe and high quality services for people vulnerable to suicide’ .

According to Prof Ella Arensman of the NSRF who led the study and is president of the International Association of Suicide Prevention (IASP), the report offers a unique opportunity to obtain greater insight into suicide among people who were in the care of the DMHS.

“This is mainly due to the completeness of information, obtained from multiple sources including clinical records, family informant interviews, Coroners’ records, and questionnaires from health care professionals. Therefore, this report will make a difference in terms of increasing awareness, improving assessment and management of people at risk of suicidal behaviour in a mental health service setting’”.

The DMHS thanked all the family members who shared their personal experiences to help the study achieve a greater understanding about people whose untimely deaths occurred while they were users of mental health services.

There were a number of new initiatives implemented to address the prevention of suicide within the service whilst the study was taking place.

The makers of the report say that whilst these measures are not directly emerging from the research they are significant.

· The development of Connecting for Life Donegal suicide prevention action plan which represents a whole of society approach to reducing deaths by suicide and is already in its first year of implementation.

· The appointment of two self-harm nurses in the Emergency Department of Letterkenny University hospital to ensure risk assessment and follow-up with all patients presenting with self-harm.

· The appointment of two Suicide Crisis Assessment Nurses offering consultation and assessment to individuals in crisis presenting to GPs.

· The establishment of a Suicide Family Liaison Service through Console to ensure immediate support to families and individuals in the aftermath of a suicide death of a family member.

· Training in self-harm awareness has been delivered to mental health and primary care staff.